A number of economists and peace and world security experts have noted the world’s intensifying competition for increasingly scarce natural resources and skyrocketing levels of exclusion and inequality and asked:

Has the current global economic system reached its limits?

To ask such a question launches many people on a search for alternative economic systems to create a more inclusive, equitable, and sustainable world.

One alternative is thriving in Brazil: the “solidarity economy.”

In this first of a three-part examination of the inspirational solidarity economy movement in Brazil, we will look at the beginnings of the movement and its varied members.

As Adriane Ferrarini of the Solidarity Economy and Co-operative Economics Research Group point out, Brazil, and Latin America in general, have a long history of solidarity economy, “beginning with pre-Columbian indigenous forms of production and the collective systems adopted by freed slaves (known as quilombolas in Brazil).” Yet, the sophisticated solidarity economy that we see in Brazil today began less than 30 years.

Throughout the 1980s and 1990s, the economy in Brazil lurched from one crisis to the next. More and more people found themselves without paid work and forced into the informal sector to create their own livelihoods. Three of the most common sources of income became, and continue to be, family farming (48 percent of solidarity economic enterprises today), artisan production (23 percent) and selling recyclable materials picked from open air dumps or city streets (four percent). Many communities also created alternative forms of providing credit, banking and microfinance for themselves.

At the same time, the end of the military dictatorship in 1984 and subsequent democratic reforms enabled numerous non-governmental organizations (NGOs) to form and unions to operate. As Daniel Tygel, former executive secretary of the Brazilian Solidarity Economy Forum, points out, the roots of the solidarity economy grew with the support of five sectors:

Here Is My Place is a 25-minute documentary by U.S. filmmaker Sarah Garrahan that offers a glimpse into the lives of five women who live in a favela (“slum”) on the outskirts of Rio de Janeiro in Brazil. The baking and skill-share collectives that the women participate in are supported by the Programa Raizes Locais (Local Roots Program), a community-based project run by Associação Brasileira Terra dos Homens, a children and family advocacy NGO  which has operated there since 2007 after a study revealed that a large number of the street children in Rio came from the community. Programa Raizes Locais offers theater and capoeira (Brazilian martial arts) classes for children, counseling for pregnant women, and recently formed a women’s baking cooperative. Watch online https://vimeo.com/147332282.

This was the beginning of the Brazilian Solidarity Economy Forum (FBES), which, with the support of public policy makers, has become the most important and representative impetus behind the consolidation and growth of the movement. 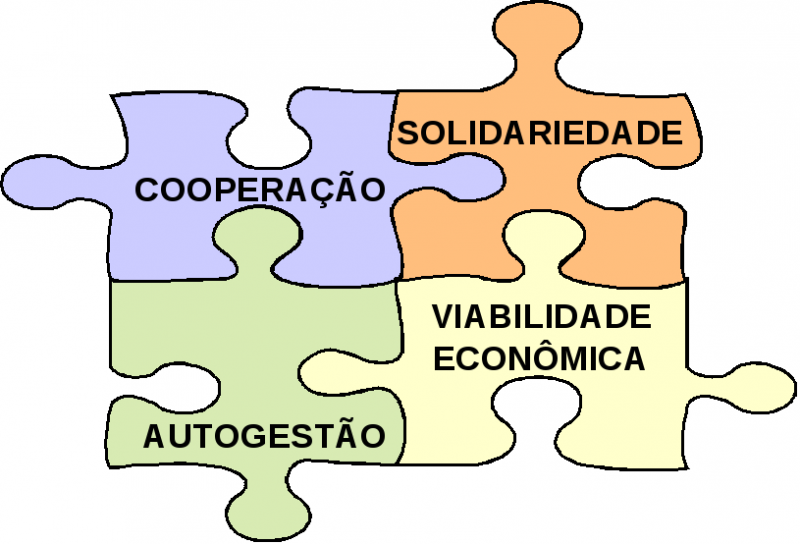 Cooperation: Members share common goals, unite efforts, collectively own property, share profits and liability;
Self-management: Members have equal decision-making power and participate in important decisions of the enterprise;
Solidarity: Members work toward common goals, fairly distribute opportunities for personal and professional development, improved living conditions and welfare of workers and consumers;
Economic viability: Members carry out the work of the enterprise which is focused on an economic end.

People create solidarity economic enterprises in a variety of ways. In many instances, individual farmers, seamstresses, recyclers, artisans, or service providers join with others in the same profession to work as partners, with no bosses or employees. They pool resources to buy needed technologies to gain easier access to credit, such as farmers buying a common tractor.

Sometimes solidarity economic enterprises form spontaneously; other times, support organizations such as the FBES, play a role in bringing workers together.

Often, an existing community, such as indigenous peoples or quilombos (communities originally formed by escaped slaves), decides to take on an economic effort together. Workers from shuttered factories have even been known to take over the property as the site for their newly-formed cooperative.

Consumers have formed buyers’ cooperatives to gain access to better quality products at lower prices. They also have established exchange markets where members bring goods to exchange as well as to trade their skills. For example, a plumber may trade fixing a person’s sink with that person providing baked goods in exchange.
There is also a growing solidarity financial sector that aims to provide financial services such as credit, savings, bank accounts, for communities that are excluded from traditional financial services. The most prominent form of this is rotating solidarity funds.
Some rotating solidarity funds function with members donating an amount of money per month to support a community project of mutual benefit, or an individual member on a rotating basis. Members vote on how to use the money.
Solidarity funds are not only monetary, but can also be other resources such as animals, seeds, person-hours of work and more. Members that receive a benefit are expected to repay the fund to keep the support moving through the community.
One common example of solidarity funding is livestock, such as goats in the semi-arid region of northeast Brazil. A local government or more likely NGO, will make an initial donation of goats to a community organization, who in turn awards two goats to a family who are expected to pay back not only two goats, but more in future generations to increase the community stock. The decisions of what needs to be repaid and when are made by community members by a vote.
Credit unions, usually formed in rural areas to support farmers, are another popular type of solidarity financing. There are also an increasing number of community banks that function similarly to traditional banks except the community itself is the owner and manager. Community banks often provide credit to people excluded by traditional financial providers.  Some communities have created local complementary currencies to keep money in the community.

Solidarity economy is here to stay

To have a better idea of the impressive size and impact of the solidarity economy in Brazil, the movement worked with the federal government to carry out national mapping projects, first in 2007 and again in 2013.
The 2013 survey counted more than 1,420,000 members of 19,708 enterprises in more than 2,700 cities in every state of the country.
The northeast of Brazil – historically the poorest region with much of the land semi-arid with occasional severe droughts – contains nearly 41 percent of Brazil’s solidarity economic enterprises, though having only 27 percent of the overall population. Over half of the enterprises nationally function in rural areas (54.8 percent), with 34.8 percent in urban setting and 10.4 percent are rural/urban.
Most of the enterprises continue to be small – 42 percent have fewer than 20 members and 60 percent of the enterprises’ gross income is less than 5000 reals per month (approx. U$1600). Yet there are also almost 500 enterprises with monthly gross income of more than 100,000 reals (~U.S.$32,000). Gross income of this level demonstrates that the solidarity economy is not limited to small businesses, but rather, it has the potential to include even larger endeavors, like the Mondragon cooperative from the Basque region of Spain that has more than 80,000 workers in 289 businesses.
From humble beginnings, the solidarity economy movement in Brazil continues to grow and mature. While economic crises were the reason that many people originally got involved in a solidarity economic enterprise, the fact that the movement has seen rapid growth even during strong economic times shows that the solidarity economy is here to stay.
In the next part of the series we will look at how the movement is organized, how it has been able to join grassroots enterprises, NGOs, and government officials behind a common cause. We will also look at how government policies have been helpful or harmful in this development.
ENCOUNTERS is an e-newsletter publication of the Maryknoll Office for Global Concerns’ Faith Economy Ecology Program. Each issue of ENCOUNTERS focuses on one of the four pillars of the Faith Economy Ecology statement endorsed by more than 80 groups. Read the statement in its entirety at http://bit.ly/FEEstatement.  Sign up to receive Encounters monthly at http://maryknollogc.org/
Attachment: