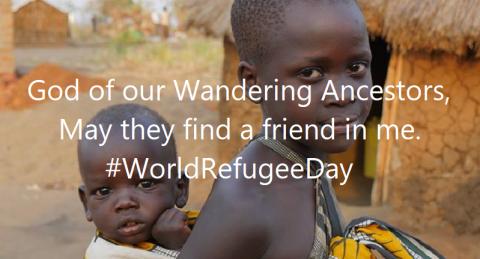 This year’s celebration of World Refugee Day on June 20 is more important than ever.  We offer the following resources for study, prayer, and action in support of refugees throughout the year.

As the trend of protracted violent conflicts continues, Maryknoll missioners are encountering more and more refugees – people forced to leave their countries in order to escape war, persecution, or natural disaster. The top six countries where refugees come from in 2018 are Syria, Afghanistan, South Sudan, Myanmar, Somalia, and the Democratic Republic of the Congo. Maryknoll missioners offer relief and comfort to refugees in some of these countries and in countries where these vulnerable people have sought safety and shelter.

The United Nations reports that we are now witnessing the highest levels of displacement on record. Here are the latest figures from the UN:

"An unprecedented 68.5 million people around the world have been forced from home. Among them are nearly 25.4 million refugees, over half of whom are under the age of 18.

There are also an estimated 10 million stateless people who have been denied a nationality and access to basic rights such as education, healthcare, employment and freedom of movement.

Nearly 1 person is forcibly displaced every two seconds as a result of conflict or persecution."

You can learn more about the data, where refugees are coming, the top hosting countries, and much more at the UN High Commission for Refugees (UNHCR) website.

South Sudan and the DRC

In the DRC, continuous ethnic and political conflicts, fueled by illicit profits from the country’s extremely rich natural resources (gold, diamonds, oil, and cobalt) have displaced nearly 4 million people. There are more internally displaced persons in DRC than any other country in Africa. More than 600,000 have fled to neighboring countries as refugees. Currently, Uganda hosts the largest number of DRC refugees, over 200,000. Pope Francis has expressed a desire to visit both the DRC and South Sudan but the violence has forced him to postpone his visit indefinitely.

In South Sudan, the civil war has entered its fifth year. Many thousands of people have been forced to flee and live in one of the UN protected areas or Internally Displaced Persons camps. Maryknoll Father Mike Bassano is a chaplain at one such camp in Malakal. Several thousand more have taken refuge in church compounds, including St. Mary’s Cathedral in the city of Wau. Maryknoll Father Tom Tiscornia is in Wau, as a chaplain at a nursing and midwifery school. Maryknoll Lay Missioner Gabe Hurrish is in Yambio, as an instructor at a teacher training college.

Nearly 2 million South Sudanese are internally displaced and 700,000 have fled the country as refugees. Uganda hosts over one million South Sudanese refugees; more than 85 per cent women and children. Maryknoll Fathers John Barth and David Schwinghamer have recently moved to Palabek Refugee Camp in Uganda to minister to the 41,000 residents – 60 per cent of them children.

“The settlement population at Palabek Refugee Camp rises weekly. We are now up to 41,000 people – 60 percent of them school-age children. Our top priority is to build and staff primary and secondary schools for these children. Maryknoll is teaming up with Salesian missionaries to provide four nursery schools to enroll 200 each. Most of the teachers have been hired in the camp itself with others coming from the Ugandans living nearby. Today the school doors opened (actually there are no doors yet, just a roof and brick pillars.) Maryknoll is supplying uniforms, school supplies and porridge each day for the next year.”
–FATHER JOHN BARTH, M.M.
Read more at http://bit.ly/JohnBarth

Almost 660,000 Syrians fled the country in 2017, according to the UNHCR. That puts the total number of refugees from the seven-year-long conflict to 5.6 million people. Most settled in neighboring countries, including Turkey, Lebanon, Jordan  and Iraq. The vast majority of Syrian refugees remain in the Middle East. The war has displaced an additional 6.6 million Syrians within the country.

About 2.5 million people from Afghanistan are living as refugees, representing the second-largest refugee population in the world. Pakistan hosts nearly 1.4 million, including some second- or third-generation Afghan refugees who have never lived in their home country. Some have been forced to return home from neighboring countries, but increased violence there since 2015 has led to a new surge of asylum seekers. As many as 1.5 million Afghanis are displaced within the country due to conflict.

Maryknoll Sister Rosemarie Milazzo regularly volunteers with a peace team in refugee camps in Kurdistan, Iraq and Lesbos, Greece. "What is it like to be a refugee in a camp?" Sister Ro wrote in Maryknoll Magazine. "The children run around, while parents try to keep busy with some of the ordinary duties of parenting. I watched young adults sitting, waiting. So many of the young men in the camp have no work and no opportunity for school. They just sit and wait."

"I have to hope we can [achieve peace], yes. I can’t be a human being – a Christian human being – who doesn’t believe that human beings can do any of the transformation work or the awareness work that will help us to let go of the anger and the hatred and the mistrust. Thich Nhat Hanh says, 'Be the peace you want to be.' Gandhi said, 'Be the change you want to see in the world.' We have wonderful mentors who have done it; it’s not like we don’t have the inspiration of strong, wonderful mentors. Look at Nelson Mandela. So when people say they don’t think it’s possible, I think it’s possible. I think we’re going to have to pay the cost, we’re going to have to struggle with it and each one of us has to do our part – first in our own lives and then in the bigger community and, hopefully, the world."
–SISTER ROSEMARIE MILAZZO, M.M.
Read more from her interview in the Global Sisters Report

Hope at the United Nations

Maryknoll Sister Marvie Misolas and Father Frank J. Breen carry the voices and concerns of Maryknoll missioners and the refugees they serve to the United Nations. Right now at the UN, member states are consulting NGO representatives like Sister Marvie and Father Frank as they negotiate text for two Global Compacts, one for Refugees and the second for Migrants. The aim of the global compacts is to create a framework for safe, orderly and regular migration.

Our two Maryknoll missioners at the UN are working with their colleagues from other international Catholic organizations to advocate for the compacts to include four verbs proposed by Pope Francis in his message for World Day for Migrants and Refugees this past January: Welcome, Protect, Promote, Integrate. "Dear brothers and sisters, in light of these processes currently underway, the coming months offer a unique opportunity to advocate and support the concrete actions which I have described with four verbs," Pope Francis said. "I invite you, therefore, to use every occasion to share this message with all political and social actors involved (or who seek to be involved) in the process which will lead to the approval of the two Global Compacts."

The compacts are a significant opportunity to improve the governance on migration, to address the challenges associated with today’s migration, and to strengthen the contribution of migrants and migration to sustainable development. The process to develop this global compact for migration started in April 2017 and will continue through 2018 with the hope of adopting a Global Compact on Migration in the near future.

The U.S. Catholic Bishops’ Justice for Immigrants Campaign offers a toolkit for Catholic parishes which includes answers to common questions about refugees, suggested talking points, tips for writing letters to editors and the following prayer: 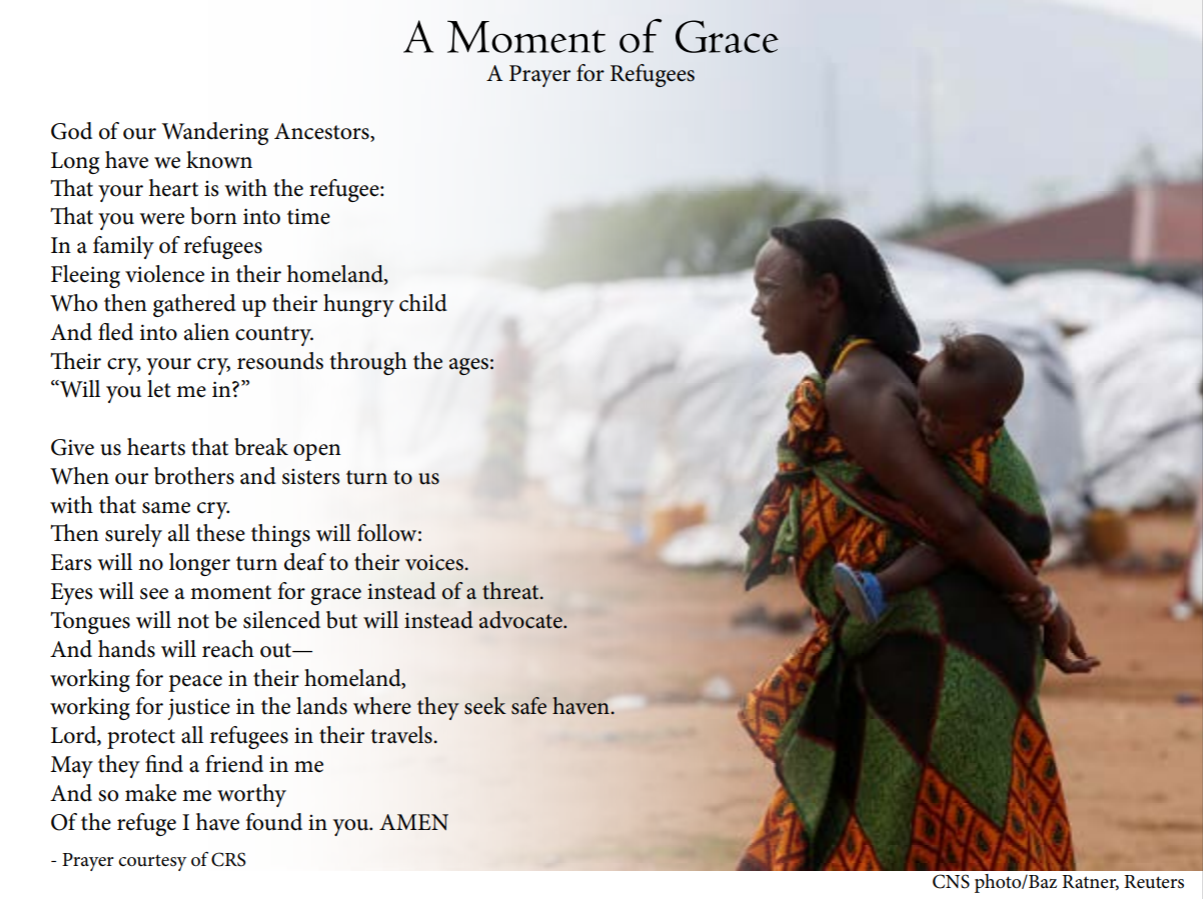