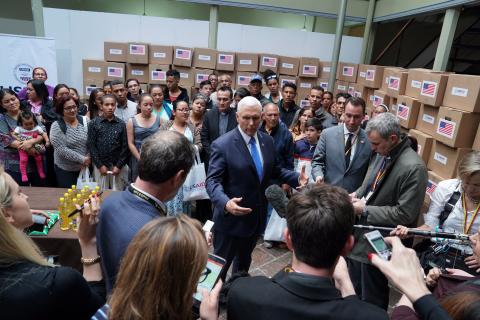 The drumbeat for war has been growing louder in recent weeks. How alarmed should we be? The following article was published in the March-April 2019 issue of NewsNotes.

On February 23, the world watched as Venezuelan troops fired tear gas at angry protesters unable to cross into Colombia to gather humanitarian aid placed there by the U.S. government after President Nicolas Maduro closed the border to stop the opposition. Attention has since turned to National Guard troops stationed at the border crossing to see if they would fulfill President Maduro's orders to maintain the blockade.

As the humanitarian and economic crisis worsens in Venezuela – the people of Venezuela are facing shortages of food, medicine, and basic services amid widespread corruption – the fear of foreign intervention grows. Opposition leader Juan Guaido, Venezuelan National Assembly Speaker who has been recognized as the country's acting president by over 50 countries, ignored a court-imposed travel ban and toured Latin American allies to boost support for his campaign to oust President Maduro. At the time of this writing, it is unclear what will happen if he were to risk arrest by returning to Venezuela.

Guaido has proposed that the United States consider "all options" to oust Maduro, including a coup.  All the while, Maduro insists he is the legitimate president, and is backed by China, Russia and Cuba.

Photo: US Vice President Mike Pence speaks to reporters in front of US aid shipments and Venezuelan migrants in Bogota, Colombia on February 25, 2019.  Photo credit: The White House/Public domain.

“Intervention in Venezuela would be a complete nightmare,” said Geoff Ramsey, the Assistant Director of the Venezuela program at the Washington Office for Latin America (WOLA). “One thing is the regular armed forces. Another is the presence of irregular armed groups. There is a real chance of any kind of armed intervention turning into a protracted inter-armed conflict that could last decades. But the good news is that even though it’s on the table, and I’m alarmed by that, it’s definitely not the basis of a U.S. or international strategy and I’m encouraged by that fact.”

Listen to Geoff Ramsey in his new podcast “How to Get Back to Democracy in Venezuela Without Military Intervention” at http://bit.ly/WOLAVenezuela

The Lima Group – the now 14-country group that has criticized the breakdown of democratic order in Venezuela under the Bolivarian Government that stretches from 1999 with the election of Hugo Chávez to the presidency, the installation of his Bolivarian Revolution and spanning in to the present day – has stated clearly that it does not support a military intervention as a means to mediate the crisis in Venezuela. "No one [in the Lima Group] supports a military solution to the situation [in Venezuela]," said Brazilian Vice President Antonio Hamilton Mourao in February 25. "It is necessary to look for other ways to deliver humanitarian aid to Venezuela."

On February 28, former Maryknoll Lay Missioner Lisa Sullivan, who has lived in Venezuela for 30 years, posted on her blog from her home in the countryside of Sanare, Venezuela: “Many have asked what can you do. Your prayers, your concerns your love, first and foremost. And anything to stop U.S. military intervention by calling your Senator and Member of Congress. While the fear of real bullets hangs over us daily, the pain of food bullets is a raw and open wound.”

Lisa writes from the perspective of el pueblo (“the poor”), whose hunger is driving them to extremes of looting grocery stores and violently protesting the government.

You can read more of Lisa’s blog at https://lisavenezuela.blogspot.com/

For balanced assessments of the Venezuelan crisis, read the Washington Office on Latin America’s Venezuela Blog (https://venezuelablog.org/) and the North American Congress on Latin America (NACLA):https://nacla.org/news/2017/05/03/why-venezuela-spiraling-out-control

Some U.S. Churches are speaking out. Leadership of the Presbyterian Church of the U.S.A. issued a statement to members calling for prayer for peaceful resolution of the crisis in Venezuela.

Global Ministries, a common witness of the Christian Church (Disciples of Christ) in the United States and Canada and the United Church of Christ, sent a letter to President Donald Trump to ask him not to authorize a military intervention. “It could bring back the darkest pages in the history of the country when the military overthrew civil governments to install dictatorships and de facto presidencies. Every time Venezuela, or any other country in Latin America and the Caribbean, has suffered a military episode in its recent times, the lives of the poorest and the most vulnerable populations have been severely damaged,” the letter states.

Faith in Action: Tell your Members of Congress to oppose U.S. military intervention in Venezuela. This action alert is organized by SOA Watch. http://bit.ly/SOAWatchVenezuela