Venezuela: Causes and effects of the crisis 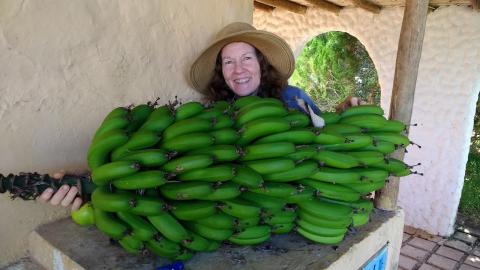 Democracy in crisis-torn Venezuela is quickly eroding, as the oil-based economy crashes and people grow more desperate for food and medicine. The following article was published in the September-October 2017 issue of NewsNotes and examines how Venezuela came to be in this crisis and how it is affecting the people from the perspective of el pueblo (“the poor”).

As Venezuela suffers a massive humanitarian crisis, with critical shortages of food and medicines and the world’s highest inflation rate (600 percent), President Trump recently announced new economic sanctions against the country that will cause even more hardship on the literally starving masses in the barrios of Caracas and other Venezuelan cities.

In one of the world’s richest nations in oil and gas reserves, Venezuela’s overdependence on oil income (96 percent of the economy) has made its economy critically impacted by low oil prices. Average income per person has shrunk by more than one third in the past three years, and imports – which account for the major source of food as well as medicines in the country – shrank by 75 percent in the past five years.

Venezuela is one of the most violent of countries not at war and its capital, Caracas, has the second highest murder rate in the world. Violent political protests have been met with equally violent repression by the government. Dozens of opposition and government supporters have been killed in almost daily protests since April.

A majority of Venezuelans don’t have enough food. The country only produces 30 percent of the food it needs to feed its population. Prices on imported food are so high that it would cost the average family 12 basic salaries to afford a month’s grocery bill. CARITAS reports child malnutrition in many parts of Venezuela has reached crisis proportions, while the health system is close to collapse. Once vanquished chronic diseases such as cholera and malaria are on the rise for lack of available vaccines and medicines.

Hundreds of thousands of Venezuelans are migrating to Colombia, Brazil, Trinidad and Tobago, Chile, and Peru out of desperation.

How did Venezuela get in such a state? While mainstream U.S. media have for years painted the socialist government of Hugo Chavez as authoritarian, in reality, his party repeatedly won free and fair elections from 1998 through 2015. It won by large majorities for all those years because it delivered positive change to the poor of Venezuela’s barrios.

Since early 2016, however, the government of Nicolas Maduro has become increasingly authoritarian, by cancelling a national referendum, suspending elections, and imprisoning opposition leaders. Meanwhile the devastated economy and subsequent humanitarian crisis have sparked protests and government responses have become increasingly violent.

Ultimately, dialogue between the opposition and the government is the only solution to the crisis in Venezuela. The Trump administration’s sanctions will only worsen the situation. Even Pope Francis has called for a national dialogue between all sectors of Venezuelan society, something that to date neither the government nor the opposition have been willing to accept.

To learn more about the experience of the crisis from the ground level, we offer a recent blog entry written by former Maryknoll Lay Missioner Lisa Sullivan, who has lived in Venezuela for 30 years. From her home in the countryside of Sanare, Venezuela, Lisa writes from the perspective of el pueblo (“the poor”), whose hunger is driving them to extremes of looting grocery stores and violently protesting against the government. You can read more of Lisa’s blog at https://lisavenezuela.blogspot.com/2017/ .

“MONDAY, JULY 3, 2017—Yesterday, half of the participants of our youth exchange weekend didn’t show up, because they were looting.

“They were the half who live in the city of Barquisimeto. The other half were kids from my little town of Palo Verde. It was meant to be Part Two of a rural-urban youth exchange that began last month.

“I have known the looters since they were 8 years old, when I lived and worked in their barrio as a Maryknoll Lay Missioner. They are now in their last year of high school, just weeks from graduation.

“I taught them as kids to play the cuatro ( a Venezuelan guitar ) and my partner taught them to play the drums. We formed a musical group called Los Zagalines de San Juan.

“One summer when my artist-daughter Maia was home visiting from college, she helped the kids paint a colorful mural. It sprawled across the outside wall of the cultural center – the kids’ second home. The title of the mural was: Este es el barrio que sonamos. (“This is the neighborhood we dream of.”) Kites, trees, mangoes, kids, and pink and turquoise houses lit up the wall.

“As I look back, I wonder how we didn’t realize then that the barrio we dreamed of was already a reality. Every single kid I knew was in school, universities were free and abundant and nearby, and any profession seemed within reach of anyone. Food was so subsidized, it was practically free. A former Maryknoll colleague joked in her visit that it seemed that for every year of Chavez’s presidency, people had gained a kilo. Medical care was free and around the corner. Community councils distributed everything from light bulbs to internet satellite dishes, for nothing. Even houses were free for those who needed one.

“Venezuela was about seven years into the revolution at that point in time. We never ever dreamed of the backwards slide that awaited.

“My young future looting friends remained on the straight-and-narrow throughout the decade that followed. They steered away from drugs and gangs, became wicked good drummers. They rose through the ranks of the cultural center’s vacation program, first as participants, then as facilitators, then full-fledged counselors. Younger kids dreamed of being just like them. Parents thanked them for their dedication.

“Thursday evening the bedlam began. Ledys and I had come to the barrio to visit his dad. We got out just as the National Guard post was going up in smoke. We skirted past road blocks of burning tires, trash and glass, and dodged a shooting spree between the Guard and protesters.

“No one can explain just how the situation dissolved into looting. We started receiving calls from friends in the barrio around 8 p.m., then at 10, at midnight, and into the wee hours. Dozens of food stores in the commercial strip of the barrio had their windows and walls smashed. Word spread and what seemed like the whole barrio descended upon the goods, clearing the shelves with amazing proficiency.

“When the smoke cleared – literally – some 24 hours later, we received a call from the coordinator of the cultural center. Four people from the community were dead and one of the kids from the center was caught red-handed and jailed. After hearing our shock, he informed us that at about a dozen of the youth leaders were involved in looting.

“For every year that has passed since Chavez’ death, those extra-gained kilos have been shed, and maybe two or three or four times more. These kids – my Zagalines, my muralists, my drummers, my camp counselors, my dreamers – have become walking skeletons. Their crime this past weekend was that of hunger.

“When it was clear that road blocks made it impossible for the looting contingent to join the gathering, we decided to go continue, with half the participants. We played games in the grass, we went on a walk to the nearby farm to collect dried bean pods, we held a scavenger hunt as the shadows of the mountains closed in on us. We ate arepas (“cornbread”) made of green bananas [due to a massive countrywide shortage of corn flour] and sang around an improvised campfire. Everyone stayed up well past the midnight curfew.

“But the core of the gathering – the exchange part – the part where the rural kids were to share with their urban cohorts about their food gardens, well, that part was put on standby, just as the soul of this nation remains on standby.