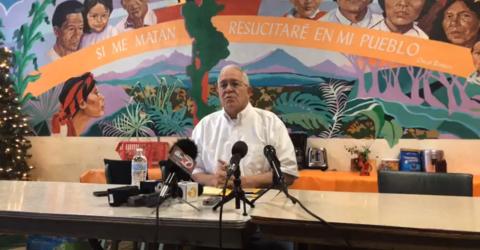 Maryknoll Father Frank Breen visited El Paso, Texas in December, where he met up with Maryknoll Father Bill Donnelly of St. Patrick Parish. Together they toured some of the shelters for migrants and refugees. Father Breen filed this report which was published in the January-February 2019 issue of NewsNotes.

The number of migrants and refugees arriving at the southern border town of El Paso, Texas, skyrocketed in the month of December, from 300 a week to over 2,000, stretching resources for the churches and groups operating eighteen shelters in El Paso and nearby Las Cruces, New Mexico. The Catholic organization Annunciation House is the lead organizer and needs immediate assistance of funds and volunteers. It is also crucial that U.S. immigration policy changes.

We first visited Tepeyac, the diocesan compound that contains the Chancery, Seminary and Pastoral Center, which has been turned into a shelter able to accommodate up to 125 adults and children each night. We arrived in time for lunch and saw 120 immigrants who had been brought to the shelter the previous evening by U.S. Border Patrol, to have their on-going travel arrangements facilitated by volunteers at the shelter.

On that day, over a dozen volunteers from a local parish were cooking three meals for the day and a snack before bed-time, and making phone calls to sponsors, i.e. family, relatives or acquaintances who live elsewhere in the United States, who will send transport fare for these newly arrived migrants to join them. In most cases the migrants are able to travel on within a day or two, mainly by bus, but some receive airplane tickets.

The scene in the large room after lunch – of teens watching a Spanish program on a large television screen, little children playing with toys and putting on warm winter coats, adults preparing for the next stage of their journey, and young men with a soccer ball outside waiting for the game to begin – belied the treacherous journey that these refugees had made to the United States, the majority from Mayan parts of Guatemala. At a subsequent shelter, where the Diocese of El Paso rents rooms in a motel, we learned how drastic – punitive even – their first reception is once entering the United States.

Fr. Donnelly met a Guatemalan woman from the first town in which he did ministry in that country in the 1960s, who narrated in graphic details what happened when she was apprehended by Border Patrol. “My seven-year-old son and I were put in cells for six days, forced to sleep on the cold floor with only one blanket. After five days they woke us up in the middle of the night to take a four-minute shower, two minutes each. The soap they gave me was terrible. I seriously thought of going back to Guatemala.”

All of the refugees are treated in this fashion. We have to presume that it is the policy of U.S. Border Patrol to treat those in detention harshly to try to discourage others from coming – but it doesn’t seem to be working. Conditions back in their home countries, primarily Guatemala, El Salvador, and Honduras, are so dangerous, so violent and impoverished, that they are willing to risk how they will be treated in the United States. Ruben Garcia, the director of Annunciation House, was quoted saying that he expected the numbers to rise to perhaps 3,000 a week. This will overwhelm the resources of the diocese and the shelters.

We were fortunate to meet with Bishop Mark J. Seitz of El Paso, who acknowledged the recent spike in numbers of migrants and refugees and the toll it is taking on local volunteers. He mentioned other matters of diocesan advocacy:
First, migrants without sponsors in the United States are returned to Ciudad Juarez, Mexico. There the asylum process is so slow and cumbersome that church officials are advocating that the process be expedited.

Second, the draconian conditions in detention cells are a blemish on our national reputation. Church officials are advocating for humane treatment of all migrants in the U.S. and especially children. The harsh conditions in the detention cells may have contributed to the recent deaths of the two Guatemalan children.

Bishop Seitz issued a pastoral letter in 2017, in which he stated: “Building walls, deploying a mass deportation force and militarizing our border are not long-term solutions to the challenges of migration. Only comprehensive immigration reform will bring lasting solutions.”

He went on to list components of reform, such as legal avenues for migrants, putting families first, and addressing unjust structural relationships between the U.S. and Central America that drive migration.

Image: Ruben Garcia, director of Annunciation  House speaks to the media during a press conference at Annunciation House in El Paso, Texas, on December 27, 2018.