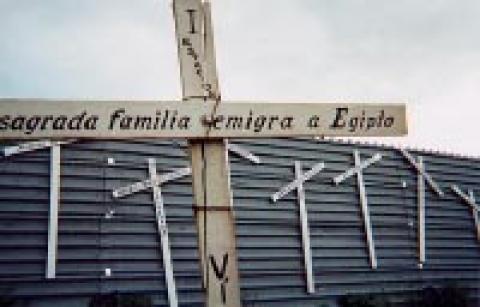 The following report was written by Marek Cabrera, who is working for a year with the Maryknoll Office for Global Concerns on Central America issues, and was published in the November-December 2014 NewsNotes.

According to a report crafted by the Washington Office on Latin America (WOLA) and the Jesuit Conference of the United States, the recent drop in the number of migrants from Central America trying to enter the U.S. through the southern border can be attributed to the policies being implemented by the Mexican and Central American governments at the behest of, and with funding from, the U.S. government. The surge of unaccompanied minors crossing the border observed since the beginning of 2014 had been significantly reduced. Detentions of minors by the U.S. Border Patrol went from 10,000 per month to about 5,000 by August of this year. And the reason behind it, it is argued, is the expanded roles of these governments in “interceptions and turn-backs of persons seeking to leave their country of origin and interdictions of people in Mexico.”

The joint WOLA-Jesuit report, U.S. support and assistance for interdictions, interceptions and border security measures in Mexico, Honduras, and Guatemala undermine access to international protection, was prepared as a chapter in a much longer document presented at a hearing entitled Human Rights Situation of Migrant and Refugee Children and Families in the United States, held on October 27 at the headquarters of the Inter-American Commission on Human Rights in Washington, D.C.

According to the report, the United States’ support for those policies “takes the form of training, equipping, and funding law enforcement and military units in Guatemala, Honduras and Mexico that are instrumental in the confinement or deportation of people, often children, families, and asylum seekers, who are pursuing access to international protection.” This international cooperation constitutes a serious violation of human rights that must be reversed, and be replaced with a comprehensive approach that addresses the root causes of the migrant crisis: widespread violence, poverty, inequality, gang and other criminal activities.

This multi-layered set of barriers, the so called “21st century border,” is being erected between Central Americans fleeing the violence, and the United States. In the construction of this new “border” the Honduran government is a major actor. It has deployed three U.S.-trained and funded special forces units to seal the border and prevent people from crossing into Guatemala. It has even sent units to prevent people from crossing into Nicaragua, according to news reports. In Guatemala too the government launched an interception program called “Paso Seguro” with support, training, equipment and funding from the U.S. Southern Command. In both countries the task was to prevent people from leaving their countries.

And in Mexico the U.S.-funded, equipped and trained Federal Police have been deployed to the southern states to patrol, intercept and repatriate Central Americans. Mexico receives millions of dollars from the U.S. through several security cooperation agreements such as CARSI and Plan Mérida. With the aid of new checkpoints and increased surveillance of the common migratory routes, including the La Bestia freight train (which traverses the Mexican territory to the U.S. border), Mexican authorities have been able to detain and deport 63,092 Central American migrants (including 12,038 minors) in the first eight months of 2014, up from 49,201 during the same period in 2013. This development is a major concern as it prevents people from accessing international protection in the face of widespread violence.

The combined actions of these governments to stop Central Americans from reaching U.S. soil violate the international corpus of human rights law in several ways, particularly in the lack of a coherent system to screen people with “cognizable claims for asylum or other forms of humanitarian relief.” As noted above, the Honduran and Guatemalan governments use their coercive power to prevent their citizens from leaving their country, indeed forcing them “back to the situations they are attempting to flee,” which is a serious violation of the human rights of those people.

Mexico, similarly, has been violating the rights of these migrants. In spite of the country’s own legal framework for the protection of migrants in its territory, which on paper neatly reflects international conventions, hardly any Central American migrant is afforded those rights. According to the WOLA-Jesuit report, “[Out] of 700 interviews with children deported to El Salvador and 300 Salvadoran adults, only one child reported having been referred ... for screening and evaluation.” Several human rights organizations have documented cases of people who have been threatened, and even murdered, upon their deportation.

Given those governments’ records on human rights, corruption, collusion with organized crime and institutional weakness, the United States’ decisive support of those practices is deeply disturbing. The disappearance of 43 indigenous student teachers in Iguala, Mexico, in September of this year, along with the revealed links between authorities and death squads in that region, the many mass graves being discovered while searching for the students, and the inability of the national authorities to find them, all highlight how wrongheaded it is for the U.S. government to basically outsource the protection of its southern border.

Furthermore, the actions of all the governments involved, according to the report, “are well outside the bounds of international law” because they violate the important principle of non-refoulement enshrined in article XXVII of the American Declaration of Human Rights. Under this principle, “States are bound not to return or expel a person - asylum seeker or refugee - to a State where her or his life or liberty may be threatened...due to generalized violence...nor to a third State from which she or he may later be returned to the State where she or he suffered the risk.” This is an important principle of international law for the protection of human rights, and must be upheld.

The U.S. government, instead of channeling those abundant funds to erect a “21st century border” that not only violates human rights but also human decency, should focus on a major effort to draft, fund and support participatory, democratic development in the “sending countries” so that the true causes of the migration crisis are addressed. The widespread violence, destitution, corruption, state repression, forced gang recruitment and extortion must be confronted if a minimum level of what Johan Galtung termed “positive peace” is to be achieved. Working with the governments of Mexico and Central America to prevent people from fleeing for their lives does not even rise to the level of Galtung’s negative peace.