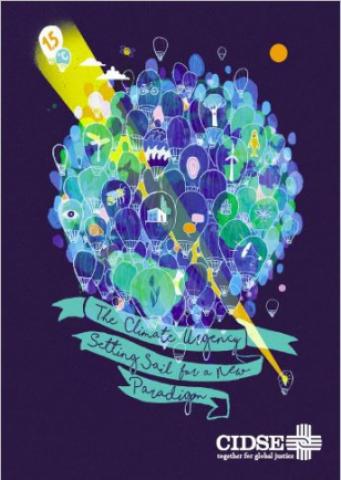 Leaders from around the world are meeting in Poland December 2 – 14 for the United Nations' annual climate change conference. The conference in the coal mining city of Katowice is expected to work out how governments can report on their efforts to reduce green gas emission and keep global warming well below 1.5 degrees Celsius, as agreed in 2015 in the Paris climate agreement.

Watch the livestream of the Catholic faith communities' side event: "How do we get there? The role of agriculture, energy and systemic change to meet the Paris Agreement" on Thursday, December 6. The event is organized by CIDSE, an international alliance of Catholic development agencies working together for global justice. Livestreaming at http://owl.li/8XvI30mQdeE

Most important gathering since Paris

UN Secretary-General Antonio Guterres called the summit the “most important gathering on climate change” since the Paris accord was signed. The UN set the tone for this year’s Conference of the Parties (COP24) in October with the release of a dire report on the likelihood of keeping future global warming below 1.5 degrees Celsius.

The IPCC special report warned of catastrophe if the world were to warm too much, and kicked off months of warnings that COP24 is the “last chance” to solve the climate problem.

The report is particularly consequential for this year’s COP as signatories to the Paris agreement are assessing their pledges individually and collectively to determine if they are on track to reach the goal of the agreement – to keep the average global temperature increase to well below 2°C above preindustrial levels while pursuing efforts to limit the temperature increase to 1.5°C above pre-industrial levels. This process is called the Talanoa Dialogue. The hope is that countries will make more ambitious commitments in 2020.

“It is hard to overstate the urgency of our situation,” Guterres said in a speech at the opening ceremony of COP24.

President Trump announced his intention to pull the United States out of the Paris in May 2017.  Since then, the Trump administration has been steadily dismantling Obama administration efforts to curb climate change and greenhouse gas emissions by gutting federal regulations on oil, coal and gas emissions, expanding fossil fuel operations on public lands. The president has even said outright that he does not believe the conclusions of the latest national climate assessment on the critical consequences of climate change issued last month by 13 government agencies from his own administration.

The Brazilian government has withdrawn its candidacy to host next year's UN climate change conference (COP25). "Environmental policy must not be allowed to botch Brazil's development," said far-right politician and President-elect Jair Bolsonaro. According to the United Nations, another country must now be found in Latin America, as it is the region's turn to host the conference in 2019. If nobody wants to host the climate summit, the conference would be held in Bonn.

The Holy See issued a statement on behalf of Pope Francis on the opening day of COP24, offering full support for the Paris agreement and encouraging developed countries to take the lead. “The scientific data at our disposal clearly show the urgent need for swift action, within a context of ethics, equity and social justice. The transition to a reduction of greenhouse gas emissions is a problem not only within the domain of technology, but also a question consumption patterns, education, and lifestyles,” the statement reads.

Read the full statement by the Holy See

The Holy See seems to call out the lack of participation of world leaders like President Trump by saying “it would be tragic for individual or private interests to prevail over the common good, especially when these tend to manipulate information to protect their own initiatives.”

“We should avoid falling into these dangerous attitudes that certainly do not foster a process in which sincere and productive dialogue, solidarity and creativity are so necessary for the construction of the present and future of our planet,” the Holy See states.

The seriousness of this moment cannot be overstated. “In the face of such a complex issue as climate change, the Holy See concludes, “where the individual or the national response in itself is not sufficient, we have no alternative but to make every effort to implement a responsible, unprecedented collective response, intended to ‘work together to build our common home.’”

Watch Energy to Change a new documentary produced by CDSE that celebrates people and communities using energy sustainably. These unsung heroes aren’t waiting for politicians to change our energy system The full documentary will premiere at COP24 on December 7. Watch the 3-minute trailer on Youtube.

Read CIDSE’s new report “The Climate Urgency: Setting Sail for a New Paradigm” [report cover image at top of this page]. The 52-page report analyzes the radical and urgent change needed to limit global warming to 1.5°C, looking at the energy and agriculture sectors and society as a whole. Find links to the report and exective summary here.