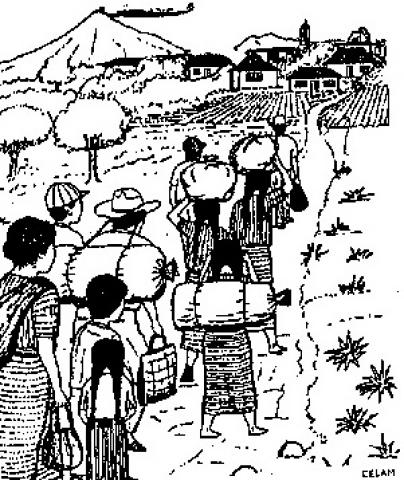 At each phase of what appears to be the Trump administration’s plan to sever bridges for people forced to migrate, we look beyond the surface of conflict and see others in their deepest dignity. The following article was published in the November-December 2017 issue of NewsNotes.

After a violent attack by a terrorist in New York City on October 31, President Donald Trump ordered “extreme vetting” of immigrants and all visitors to the country. The administration appears to be moving through a multi-phased plan and we continue to respond to each phase.

One of the largest immigrant groups to be targeted is the Dreamers – recipients of Delayed Action for Childhood Arrivals (DACA). President Trump rescinded the Obama-era program on September 8, casting a shadow over the future of the nearly 800,000 recipients, all of whom were brought to the U.S. illegally as children and have gone on to attend school and college, work, or serve in the military. These young, talented people once again face the possibility of life with no path to citizenship. President Trump gave Congress till March to come up with an alternative program or the Dreamers could be subject to immediate deportation.

While some members of Congress have argued for a “clean” Dream Act without riders or strings attached, the majority of members who have spoken out have demanded that a replacement for DACA include tighter internal immigration enforcement, border security improvements, a massive increase in the budgets for Border Patrol and Immigration and Customs Enforcement (ICE), and even funding for a border wall.

One bipartisan bill that seems suitable to immigrant rights advocates, a fair number of members of Congress, and the Dreamers themselves is the Dream Act of 2017, which has to pass with the budget by December 8 or it will expire. Read our letter to Congress in support of the Dream Act on page 10.

The Administration has hinted to stripping protections from another 300,000+ Central American and Haitian migrants, holders of Temporary Protected Status, or TPS. This status allows undocumented immigrants to live and work in the U.S. when natural disaster, armed conflict, or other “extraordinary conditions” in their native countries prevent their return.

The Center for Migration Studies, an educational institute in New York that was founded by the Scalabrinian Missionaries, released a report describing the estimated 200,000 Salvadorans, 57,000 Hondurans, and some 50,000 Haitians with TPS. The report includes ample evidence of hardworking people with strong family and other ties to the United States. High percentages have lived in the United States for 20 years or more, participate in the labor force at a much higher rate than the total U.S. population, speak English well, arrived as children, and have children who were born in the U.S. and thus are U.S. citizens.

The TPS recipients from El Salvador, Honduras, and Haiti make significant economic contributions by maintaining home mortgages, paying taxes, and working in industries crucial to the economy, such as construction, child care and health care. After many years of uncertainty, these vulnerable people should be afforded the right to stay where they are most safe, most able to maintain strong family ties, and where they are making the greatest contributions to society.

Even Haitians, whose TPS was extended for six months in May, have been told not to expect renewal though their impoverished native country continues to struggle to recover from the 2010 earthquake, a nationwide cholera outbreak, and a hurricane in 2016.

On October 1, Trump cut the number of refugees the U.S. would take a year from 110,000 (the cap was set by the Obama administration) to 45,000 – the lowest number since the current program began in 1980. Then, on October 25, Trump signed an order to institute new “extreme vetting” measures for refugees from Egypt, Iran, Iraq, Libya, Mali, North Korea, Somalia, Sudan, South Sudan, Syria, Yemen, and certain Palestinian males. The tighter screening requirements force refugees to provide officials with the phone numbers and addresses of every place they’ve lived for the last 10 years rather than the standard five years. Experts say these could be impossible hurdles for many refugees and amount to a Muslim ban.

Faith in action:
Tell your members of Congress to support the Dream Act before December 8.
Ask Congress to protect immigrants with Temporary Protected Status.
Urge President Trump and Congress to admit at least 75,000 refugees in 2018.