Update from Paris: 1.5 to stay alive 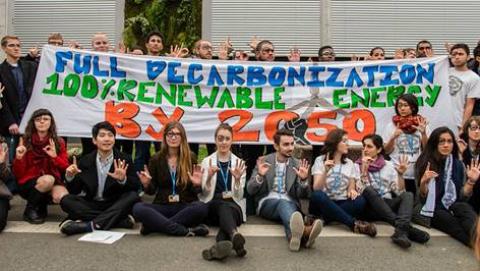 "1.5 to stay alive" is the message from vulnerable nations at COP21, including countries where Maryknoll missioners serve.

In the first week of the Paris Climate Summit, a group of developing countries from Africa, Asia, Latin America, and the Caribbean has made a big impact on the energy level and focus of the negotiations. They demonstrated a unified message at the Climate Vulnerable Forum: capping global warming at 1.5 degrees Celsius in order to avoid the worse impacts of climate change.

Voices from the Global South

The "climate vulnerable" group defines itself as a “South-South cooperation platform for participating governments to act together to deal with climate change.” It is initially composed of Afghanistan, Bangladesh, Barbados, Bhutan, Costa Rica, Ethiopia, Ghana, Kenya, Kiribati, Madagascar, Maldives, Nepal, Philippines, Rwanda, Saint Lucia, Tanzania, Timor-Leste, Tuvalu, Vanuatu and Vietnam, but will be accepting new members during the conference. They share the distinction of being countries most vulnerable to climate change due to global warming.

As warmer air holds more water and the oceans increase in temperature, the odds of extreme weather go up. Lowering global temperatures is the key to avoiding the worse impacts of climate change.

According to the 2016 Global Climate Risk Index report by GermanWatch.org, the countries most vulnerable to the impacts of climate change are in Asia: Myanmar, Philippines, Bangladesh, Vietnam, Pakistan, Thailand; and in Central America: Honduras, Haiti, Nicaragua, and Guatemala.

Create your own visited countries map or check out the JavaScript Charts.

Reducing greenhouse gas emissions is the fastest, most economical way to limit global warming and avoid the devastating impacts of climate change. The World Resources Institute estimates the annual expense related to transitioning from fossil fuels to clean energy sources to be less than the $1.9 billion spent in addressing the environmental and health impacts of global warming.

The cooperation and leadership by the Global South at the Paris Climate Summit is exciting and inspiring. They are making this a tranformational moment. Things could be different after Paris. Lives could be significantly better. We'll know more after the conference concludes next week.