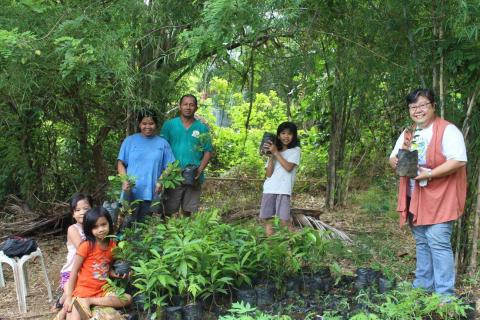 The global community gathered at the United Nations in New York in May to take action on behalf of the world’s forests. The following article was published in the July-August 2019 issue of NewsNotes.

The 14th session of UN Forum on Forests (UNFF14) took stock of progress in implementing the UN Strategic Plan for Forests, which provides a global framework for sustainably managing all types of forests and trees, halting and reversing deforestation and forest degradation, and increasing forest area by 2030.

With an estimated 1.6 billion people – or one quarter of the overall population – dependent on forests for subsistence, livelihood, jobs and income, forests are essential for human well-being, and play a vital role in promoting economic growth. Forests are also increasingly important to combat climate change.

“Forests have an important role to play in both climate change mitigation and adaptation,” the UNFF14 Panel Concept Notes state. “Forests constitute a vital part of the carbon cycle, absorbing, removing, recycling and storing large amounts of carbon dioxide through trees, understory vegetation and soils. Wood products also store or ‘fix’ significant amounts of carbon. The resilience and adaptive capacity of all types of forests helps reduce the risks of natural disasters and climate change.”

During the upcoming UN General Assembly in September, the UN Secretary-General Antonio Guterres will convene a Climate Summit in which “nature-based solutions” to climate change will be discussed. Many of these solutions focus on forests and life on the land.

During discussions at the UN Forum on Forests, participants noted that forests play a vital role in limiting global warming to 1.5 degrees Celsius in order to avoid the most devastating effects of climate change as examined in the Intergovernmental Panel on Climate Change (IPCC) Special Report. Forests are essential for their carbon sequestration or carbon dioxide removal.

Participants noted that the links between climate and forests need to be addressed in international, national and sub-national policymaking. Climate change related threats to forests include increased drought, fire, wind, flooding, erosion, and pests and disease. Sound policymaking needs to be science and evidence-based and recognize the role forest ecosystems play in climate change adaptation and mitigation. In order for policy to be effective, broader issues of land use, energy, sustainable production and consumption, means of implementation and governance, need to be addressed.

It is essential that communities have agency in the development and implementation of forest programs and that women are included. For example, in Antipolo, a city east of Manila, in the Philippines, women participate in the implementation and management of reforestation and afforestation programs that are part of the community-based watershed conservation project in an area known as the Marikina Watershed Protected Landscape. The programs aim to address rural and indigenous livelihood, water security, disaster risk reduction and nature-based resilience.

Women in the community have taken leadership roles in collecting seeds/wildlings, setting up seedling nurseries, participating in government meetings and capacity building workshops, planting and monitoring and selling seedlings to the government. Women and men in the community have organized small-scale coop stores that sell necessities such as rice, oil, sugar and vegetables from their common garden. During meetings, men and women share how their lives have been impacted and changed, no longer cutting trees to make a livelihood and instead protecting the trees and forest. Women and men in the community have become the agents of climate adaptation and resilience.

Photo: Sr. Marvie Misolas, MM (right) with a family of farmers in the Philippines. Photo courtesy of Sr. Misolas.