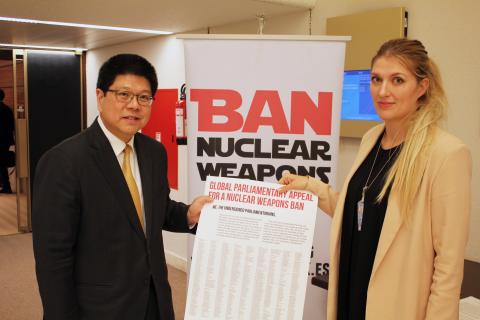 Maryknoll Sister Elizabeth Zwareva reports on the negotiations at the United Nations to adopt a treaty to prohibit nuclear weapons, leading toward their total elimination. The following article was published in the July-August 2017 issue of NewsNotes.

As the UN conference to negotiate a nuclear weapon ban began, I sensed excitement and observed an attitude of listening among the delegates and the president of the conference, Elayne Whyte Gomez, permanent representative of Costa Rica. The negotiations were based upon a draft treaty presented by the UN disarmament panel in May.

I was impressed by the transparency of the negotiations that included comments from civil society and other stakeholders in the room. This set the tone for serious discussions that would enable state parties to finalize a treaty that in the words of Izumi Nakamitsu, UN High Representative for Disarmament, must be “legally sound, technically accurate and politically wise.” There are signs of hope that on July 7 the negotiations will conclude with the presentation of a legally binding instrument to ban nuclear weapons leading to their total elimination.

As the negotiation progressed, there was strong support for the preamble of the treaty to clearly delegitimize and stigmatize the possession and use of nuclear weapons. One state party indicated that in order for his country to agree, the provisions of the new treaty must not undermine those of the Non Proliferation Treaty (NPT).

Representatives of civil society and other stakeholders contributed to the discussions from the perspective of their lived experiences: the catastrophic nature of nuclear weapons on human life, the environment, and the economic system. The mayor of Hiroshima delivered a statement expressing the desire of the hibakusha, survivors of the atomic bombing at Hiroshima and Nagasaki, to see the ban of nuclear weapons and their total elimination during their lifetime. Although the hibakusha are mentioned only in parenthesis in the preamble, their inclusion reflects the risks posed by nuclear weapons to people, human health, humanity’s survival, and the disproportionate impact that nuclear weapons have on indigenous peoples around the world.

Maryknoll Sister Rosemary Cecchini in New Mexico reported to the Maryknoll Sisters that the indigenous community with which she works was scheduled to hold a commemoration event of the Church Rock uranium tailings spill on July 15.  “The July 15 Church Rock Spill Commemoration is part of the Intermountain West Uranium Summit in their first Cross-Border Anti-Nuclear Action,” Sister Rosemary said, “commemorating the anniversary of the largest radioactive accident in U.S. history and the explosion of the first atomic bomb at White Sands, New Mexico.” Sister Rosemary said commemorations such as this are held to raise awareness about the entire nuclear industry, which she describes “from cradle to grave, is one deadly chain.”

“Beginning with extraction of uranium, proceeding to refinement of yellow cake, through transportation on public routes, operation of nuclear power plants and weapons manufacture, to waste disposal issues, the nuclear process releases lethal radiation to air, land and water,” Sister Rosemary said. “[Nuclear] history is fraught with accidents, illness and threat to all life on Earth. It must stop before it kills more humans and other living things.”

Our hope is that the UN conference will lead to a robust, universal legal instrument to ban nuclear weapons leading to their total elimination. Maryknoll Sisters joined more than one thousand demonstrators in the Women’s March to Ban the Bomb in the rain in New York City on June 17 to encourage the negotiators to protect present and future generations and the Earth, our common home. When we ban nuclear weapons then we can say, with Saint Francis, “Praise be my Lord …” as we all profess to be “God’s instruments of peace.”

Photo: Ambassador Thani Thongphakdi of Thailand, the chair of a UN working group on nuclear disarmament, accepts a global parliamentary appeal from Beatrice Fihn, executive director of the International Campaign to Abolish Nuclear Weapons, in Geneva on May 3, 2016. Photo credit: ICAN Australia.