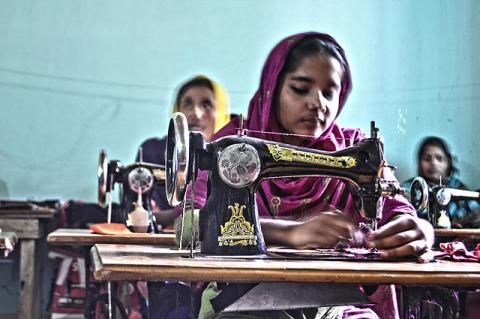 The following article was written by Chris Smith, a Maryknoll Affiliate and volunteer with the Maryknoll Office for Global Concerns, and was published in the September-October 2015 NewsNotes.

On August 11, the U.S. announced that it would not reinstate Bangladesh to a list of developing countries that receive trade preferences for lower or zero-duty tariffs due to labor rights and workplace safety issues. This so-called “generalized system of preferences” (GSP) that enables countries to qualify for advantageous trade terms with the U.S. was suspended by President Obama in June 2013 following the Rana Plaza tragedy, where 1,134 people died and over 3,000 were injured in a factory building collapse.

Bangladesh’s garment sector totals $25 billion annually, second only to China. The apparel industry accounts for 90 percent of the country’s exports. Competition among developing countries to gain shares of the U.S. market is intense, and 122 nations now receive GSP status. But the Rana Plaza accident, coupled with the Tazreen Fashions factory fire in November 2012 that claimed 112 lives, dealt a major setback to the Bangladesh apparel industry.

In 2013 the U.S. gave Bangladesh an action plan to implement in order to qualify for reinstatement of GSP, but U.S. Trade Representative Michael Froman explained that “[w]e remain concerned about the large number of factories that have yet to be inspected, the lack of progress on needed labor law reforms, and continuing reports of harassment of and violence against labor activists who are attempting to exercise their rights.”

“If Bangladesh can ensure labor rights, and regain the generalized system of preferences, the industry can make even more progress and the workers will benefit greatly,” Caritas Dhaka Regional Director Ronjon Rozario told the Union of Catholic Asian News. Caritas has been helping the families of the dead and injured, including providing assistance to start small businesses to those too traumatized to go back to factory work.

Photo of woman at one of USAID's Global Climate Change (GCC) programs sewing clothes at a training center; courtesy of USAID, public domain.