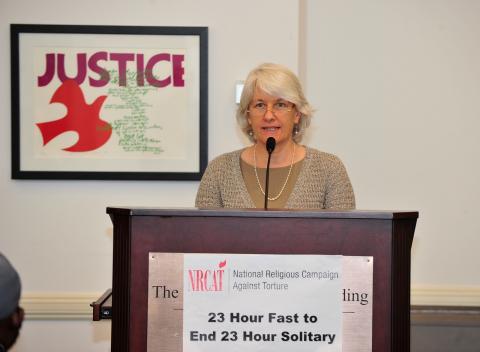 "Do you believe that ... solitary confinement, 23 hours a day — five hours a week when you're allowed to leave that box or something that size — do you believe based on your life experience that's going to have an impact on an individual?" Sen. Richard Durbin (D-IL) asked Charles Samuels Jr., director of the Federal Bureau of Prisons, who responded, "I don't believe it's the preferred option."

The use of long-tem solitary confinement has been proven to cause detrimental psychological and physiological effects, particularly on juveniles and those with mental illness. Sen. Durbin labeled the issue as a "truly bipartisan" concern of this country's morals since the U.S. holds more prisoners in solitary than any other democratic nation. (Sen. Durbin noted that the Civil Rights Division of the Justice Department declined the invitation to testify.)

Sen. Durbin is working on legislation that will minimize the use of this practice and strictly forbid the holding of juveniles and those with mental illness in solitary. Christopher Epps, commissioner of the Department of Corrections in Mississippi (one of the growing number of states already implementing solitary reform), testified that the reduction of the use of solitary has proven to lower prison violence and save millions of dollars. Another large concern, noted by Sen. Durbin, is "the impact of isolation on the vast majority of prisoners who will be released one day to rejoin our communities."

At the June 19 hearing, testimony was also heard from Anthony Graves, who was wrongly convicted of murder and served a decade of his 18.5 years in a Texas prison in solitary. He described how he "lived under some of the worst conditions imaginable with the filth, the food, the total disrespect of human dignity" in his solitary cell, similar to the replica placed at the back of the hearing room, measuring seven feet by ten feet, containing only a bunk and toilet.

In support of the hearing, a nationwide 23-hour fast began June 18, symbolizing the 22-24 hours per day for weeks, months, or even years that prisoners in solitary confinement spend in their cells. It was ended with a breaking of the bread at a press conference attended by various religious leaders active in the National Religious Campaign Against Torture's interfaith coalition. Maryknoll Office for Global Concerns' director Kathy McNeely gave a statement that embodied the Catholic concern about solitary confinement; the Protestant, Jewish, and Muslim communities also offered testimonies.

McNeely detailed the debilitating effects torture and solitary confinement had on Maryknoll missioners Sister Rosalia Kettl and Bishop James Walsh. Kettl, who was imprisoned during her mission in Hong Kong, became "ill from the tension, cramped quarters, and lack of hygiene." Walsh spent two years in solitary in China where he was not permitted to celebrate Mass, let alone communicate with anyone; when released from solitary he reflected, "I will live each present moment, filling it to the brim with love."

McNeely ended her presentation by saying, "Catholic social thought is built on the dignity of the human person …According to Church teaching all people have a right and a duty to participate in society, seeking together the common good and well-being of all…The practice of solitary confinement undermines this right and duty."

Learn more about the efforts to end torture at the National Religious Campaign Against Torture (NRCAT).

Video: Solitary confinement: Torture in your backyard: This 20-minute video produced by NRCAT is a resource for churches/communities to learn about the destructive use of solitary confinement in U.S. prisons and to engage people of faith in calling for its end in their state. The film could also work well in a college group setting, prayer group, prison ministry or social justice committee, and interfaith groups. NRCAT has prepared discussion guides and promotional materials to use to facilitate a group discussion. Visit NRCAT's website for details.