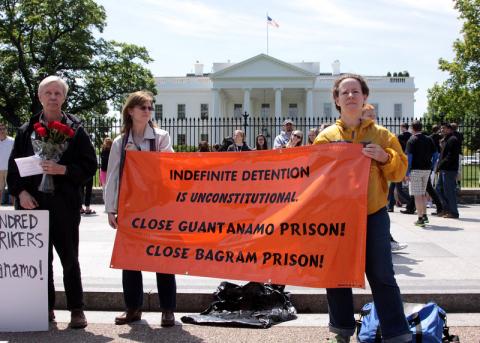 The following article was written by Kelly Kundrat, a Maryknoll Office for Global Concerns intern, and was published in the January-February 2014 NewsNotes.

In January 2002, as the U.S. ramped up its "war on terror," the U.S. military prison located within the Guantanamo Bay Naval base began accepting detainees, most of whom were from Afghanistan though others were from Iraq, the Horn of Africa and Southeast Asia. Since that time, Guantanamo has been harshly critiqued for human rights violations, including the use of waterboarding, forced-feeding, stress positioning, indefinite detention, and a lack of due process. Of the over 800 prisoners kept within the detention facility, only seven have been formally convicted, directly outlining the facility’s superfluous existence.

Some strides to close Guantanamo Bay Prison have been taken and progress has been made; on December 26, President Obama signed the final version of the FY 2014 National Defense Authorization Act (NDAA). The legislation includes provisions that significantly ease the restrictions on transferring detainees out of Guantanamo to other countries. The bill has passed both the House and Senate, and, having been signed by the president, is now law. The president will now have the authority to transfer large numbers of detainees out of Guantanamo.

On December 31, three Uighurs, members of a Muslim ethnic group much-maligned in their native China, were finally released to Slovakia. (Their release had been ordered in 2008.)

While the passing of the NDAA is a step, the pressure from the faith community must remain. At present, 155 men continue to be detained. We applaud the progress made, but must remain vigilant in our determination to end this moral travesty.

In his 2013 open letter to Defense Secretary Chuck Hagel, Bishop Richard Pates (Des Moines, IA), chair of the Committee on International Justice and Peace of the U.S. Conference of Catholic Bishops (USCCB), wrote he would like to see the Department of Defense "make good on the president’s commitment to close this facility that has become a symbol of indefinite detention without trial." He went on to quote the USCCB’s statement after the 9/11 attacks; "We must not only act justly but be perceived as acting justly if we are to succeed in winning popular support against terrorism."

For the 12th anniversary of Guantanamo, interfaith groups, student organizations, and social advocates alike have planned public witnesses to call for the closure of this immoral detention facility. On Friday, January 10, the National Religious Campaign Against Torture (NRCAT) plans to hold a Public Policy Call-In Day, where members of the faith community will reach out to political leaders and voice their concerns on the continued use of Guantanamo. Alongside this public policy event, members of the Friends Committee on National Legislation (FCNL) plan an in-person lobby day where the faith community will be called to stand for those kept unjustly within the facility.

On January 11 all are invited to meet at noon in front of the White House and take part in a one hour procession. The event is sponsored by Center for Constitutional Rights, Witness Against Torture, Amnesty International, Code Pink, NRCAT, World Can’t Wait, Blue Lantern Project, and CloseGuantanamo.org, and the Maryknoll Office for Global Concerns. On this day, NRCAT also encourages people of faith to join a "prayer chain" at noon to close Guantanamo: Post your prayer to social media and encourage friends to do so too.

The activities focused on the closure of Guantanamo Bay wrap up on January 13, when members of Witness Against Torture end their weeklong fast.

If you are in the D.C. area during the anniversary weekend and would like to participate in any of the public witness events, please visit www.nrcat.org/Jan2014 for more information.

For more information on NRCAT’s work on Guantanamo, check its website: http://www.nrcat.org/post-911-detainees/close-guantanamo.