In these times: “Nonviolence or nonexistence” 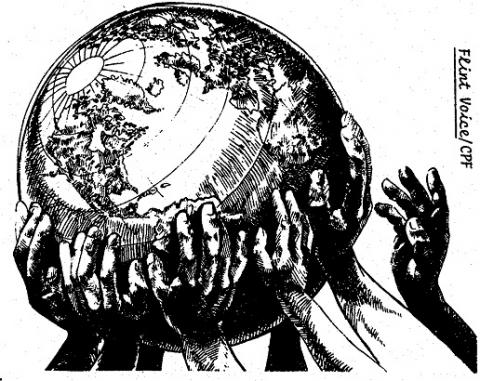 With ethnic cleansing and extreme violence in Africa, Asia, and the Middle East – and the threat of nuclear war looming on the Korean peninsula – we are looking more closely at the role of the Catholic Church in the work of active nonviolence. The following article was published in the November-December 2017 issue of NewsNotes.
The Catholic Nonviolence Initiative (CNI), which the Maryknoll Office for Global Concerns helped launch following the historic Nonviolence and Just Peace Conference held in Rome April 2016, is taking actions to promote the spirituality and practice of active nonviolence within the Catholic Church and throughout the world. This October, CNI engaged in a lively dialogue with U.S. military educators at the University of San Diego:  “The Catholic Church Moves Towards Nonviolence? Just Peace Just War In Dialogue” with participation by Bishop Robert McElroy of San Diego, Dr. Stephen Colecchi of the USCCB, and officers from West Point, Annapolis and the Air Force Academy.
Cardinal Peter Turkson gave a major address to the conference highlighting Pope Francis’ advocacy on a culture of nonviolence:
“We live in a moment in human history when fear about potential global catastrophe has intensified to a point rarely experienced before,” Turkson said. “Our conversation is decisive for what it can bring and needs to bring to this experience. The decisions made by the global human family about peace and war in the coming months and years, particularly those with potential political responsibility, will have profound advances for the future of humanity and indeed, fate of our planet.”
Turkson quoted Dr. Martin Luther King, Jr. from his “I’ve Been to the Mountaintop” speech: “The choice we face is no longer violence or nonviolence; the choice we face is nonviolence or nonexistence.”
“Today, sadly, we are still at this crossroad,” the cardinal said.  “We’re tempted to respond to violence with violence. By attempting to do so, we shall never achieve what peacemakers actually look for. But to say we must always use a nonviolent response to conflict is easy to say, difficult to put into action. The temptation to use violence is strong in a world of fear, when people are desperate for safety and for security. That is the nature of our world now. Terrorist attacks the last few years have dramatically increased peoples’ fear of insecurity. When fear gets into the driver’s seat, we cannot promote peace. However, if we want peace, as Pope Francis clearly puts it, we must encounter the logical fear with the ethic of responsibility. We must foster a climate of trust and sincere dialogue, meaning a nonviolent response to our fears and our quest for security.”
The Catholic Nonviolence Initiative has also launched an 18-month process to research and elaborate on the theological, scriptural, ecclesial and practical components of nonviolence that would inform new Catholic social teaching on nonviolence.
Organized into five “roundtables” of 10-25 teachers and practitioners of nonviolence from around the world, each group is addressing a particular topic and will produce a well-curated document that together, the CNI will offer to the Vatican at a second conference on nonviolence and just peace in early 2019. The five key topics are:
The CNI continues to build support for its “Appeal to the Catholic Church to Re-commit to the centrality of Gospel Nonviolence” among Catholics worldwide.  On October 19 the Congregations of the Holy Cross issued a joint statement on nonviolence and just peace, endorsing the appeal and advocating for a “just peace” approach rather than “just war.”
Faith in action: Sign the “Appeal to the Catholic Church to Re-Commit to the Centrality of Gospel Nonviolence”