Syria: Bring the killing to an end 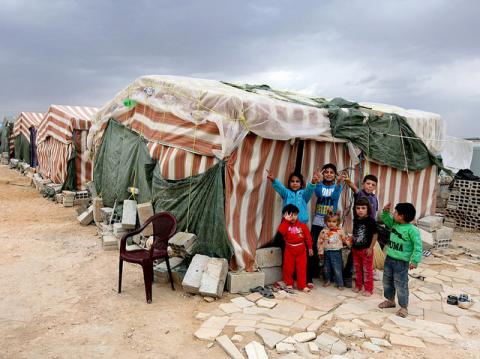 Pax Christi International issued the following statement on the occasion Action Day for Peace in Syria on October 24. It was published in the November-December 2016 issue of NewsNotes.

On this UN Day of Action for Peace in Syria, we join all friends of peace around the world in calling the international community:

Faith in action: The United Nations Refugee Agency (UNHCR) offers a petition to governments to act in solidarity and a 5-minute film based on a poem entitled ‘What They Took With Them’ by Jenifer Toksvig, inspired by first person testimony from refugees of items they took with them when they were forced to flee. http://www.unhcr.org/refugeeday/us/

Photo: Syrian children wave peace signs on October 2 as they stand in front of their tents at a refugee camp in Arsal, a Sunni Muslim town in eastern Lebanon near the Syrian border. The town has become a safe haven for war-weary Syrian rebels. Photo by Flicker user William Proby and licensed in the public domain.