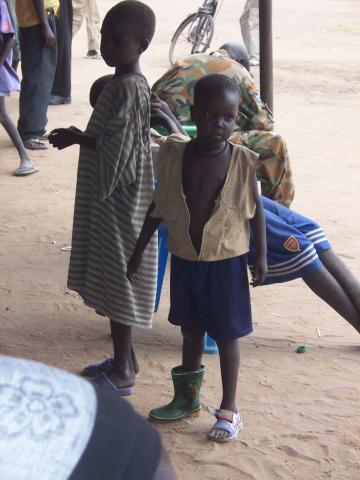 On January 5, peace talks began in Ethiopia between the government of the world’s newest nation, South Sudan, and opposition forces. The talks follow weeks of tragic conflict which continue to unfold; it is a deeply complicated situation with both ethnic and political differences fueling much of the violence. Maryknoll has a long history in Sudan/South Sudan; we join with our colleagues in the faith community in praying for the people of South Sudan.

After years of violence between what were then the northern and southern regions of Sudan, and two years after gaining its independence, South Sudan has descended into turmoil. Fighting broke out on December 15 in Juba, the capital; among other issues, President Salva Kiir has accused former Vice President Riek Machar of staging a coup. The violence has led to the evacuation of hundreds of U.S. officials and private citizens. Two UN bases in the region have been the target of attacks. In response, President Obama sent 45 troops to guard the U.S. embassy and personnel. At a December 30 briefing, State Department spokesperson Marie Harf said that Secretary of State Kerry has told both Kiir and Machar that "any effort to seize power through the use of military force will … result in the end of longstanding support from the United States and the international community. [Kerry] also has noted that all parties in this conflict have a responsibility to prevent atrocities. Those that violate international law, commit atrocities or other serious human rights abuses will be identified and held accountable."

The UN has reported the discovery of three mass grave sites, illustrating the issue of widespread systematic violence. In a statement released on December 24, Navi Pillay, the UN High Commissioner for Human Rights, said, "Mass extrajudicial killings, the targeting of individuals on the basis of their ethnicity and arbitrary detentions have been documented in recent days. We have discovered a mass grave in Bentiu, in Unity State, and there are reportedly at least two other mass graves in Juba." According to the UN, the death toll is over 1,000.

Although both Kiir and Machar are members of the Sudan Peoples Liberation Movement (SPLM), factions exist within the ruling party. When asked how the situation escalated to the point of violence when both leaders are members of the same party, Jimmy Mulla, co-founder of Voices for Sudan, told Voices of Russia, "It is more of a power struggle within the party and between the two leaders. At some point the former vice president challenged the authority of the president, saying that the country is not moving in the right direction, and the party has lost its vision. Subsequently the president dismissed him and [several] other top ranking officials from within the party. That is the start of the rift between the two."

In a statement signed by Catholic, Anglican, Presbyterian, Pentecostal and other Christian leaders, Catholic Archbishop Paulino Lukudu Loro of Juba urged leaders within the region to remain calm, protect the nation’s citizens, and avoid inciting violence. They also wished to "correct the media statements and reports that refer to the violence as conflict between the Dinka and Nuer tribes. These are political differences among the Sudan People’s Liberation Movement party, political leaders of the Republic of South Sudan." [However, hostilities between the Dinka and Nuer are real and have existed for generations; Kiir is Dinka, and Machar and many rebels, including the "White Army" (named so due to the soldiers’ use of ash as an insect repellent), are Nuer.]

Much has been invested in the birth of this young nation. We send prayers that the issues be resolved peacefully and without further loss of lives.