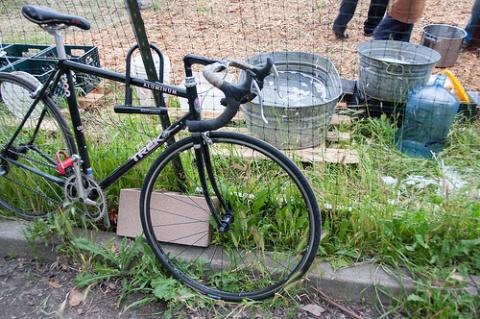 The following piece is written by Jennifer Svetlik who currently is working with the Maryknoll Office for Global Concerns’ Faith-Economy-Ecology project.

CC Image courtesy of Steve Rhodes on Flickr and made available under an Attribution-Noncommercial-No Derivatives 2.0 license.

To adequately address the climate crisis, a vast global mobilization is needed to urgently and radically reduce greenhouse gas emissions. This effort, according to economist David Rosnick at the Center for Economic and Policy Research (CEPR), could include reducing work hours.

In the report released in February, Reduced work hours as a means of slowing climate change, Rosnick estimates that a reduction in work hours by .05 percent annually through the rest of the century "would eliminate one-quarter to one-half of the global warming that is not already locked in."

Productivity is increasing in many parts of the world, and Rosnick demarcates the response of Europe (shorter work weeks and more vacation days) and that of the U.S. (increased consumption) over the past 30 years.

While stating that the variables are complex and the association not fully understood, previous studies also "have found that shorter work hours are associated with lower greenhouse gas emissions and therefore less global climate change," Rosnick notes.

A 0.5 percent decrease in work hours annually from 2013 to 2100 would mean that, beginning at a baseline of 40 hours per week for 50 weeks annually, by 2100 the work week would be 30 hours per week with seven additional weeks of vacation.

He suggests that the negative economic effects of reduced work hours are minimal because of their additional positive effects. For example, reducing work hours may increase hourly productivity and the employed percent of the population. Higher levels of employment can in turn reduce the cost of unemployment benefits. At the same time, lower levels of production will reduce greenhouse gas emissions through keeping factories and office buildings open less.

The report offers calculations based on four scenarios included by the Intergovernmental Panel on Climate Change’s 2007 assessment which describe various projected progressions of the global economy. Rosnick’s calculations seek to determine the climate’s response when increased leisure time is introduced into the various scenarios. He suggests that while 40-70 percent of future warming is already locked in, reducing work hours, alongside other policy changes, would have a substantial effect on the amount of warming humans can still influence.

The way workers spend additional leisure time is a significant variable not addressed in the report. Leisure time dedicated to biking rather than driving, to gardening and purchasing from the farmers market, for example, would further contribute to reducing emissions. Leisure involving increased airplane travel, of course, would have the opposite effect.

Rosnick asserts that reducing work hours would be difficult in countries with high levels of inequality, where such policies would mean that the majority of workers would face reduced living standards as a result. In the U.S. "just shy of two-thirds of all income gains from 1973-2007 went to the top one percent of households" he notes. Those households could easily absorb a reduction in wages associated with reduced work hours, but many households could not.

The problems with economic inequality, those related to morality and to social and economic stability, have received more media attention in the past two years, but have yet to be addressed meaningfully through policy efforts. The challenges of enacting a reduced work policy in a highly unequal society only further highlight that economic inequality in the United States must be urgently addressed.

Furthermore, for people of faith, increased leisure for workers should be of concern. The command to honor the Sabbath seeks to limit work and provides both an opportunity and an obligation to rest, reflect, and offer thanks. A rhythm of life which includes rest, prayer, time with loved ones, and participation in community life is a God-ordained right to which every worker should be entitled. Jesus’ practices of going away for reflection and enjoying frequent meals with friends should be an example that each worker has an opportunity to emulate.

Reduced work hours and increased leisure can have positive benefits for families, communities, and, according to Rosnick’s report, the environment. Creative policy solutions such as reducing work hours should be brought to the forefront of the conversation on addressing climate change.