Separating Families at the Border: A costly practice 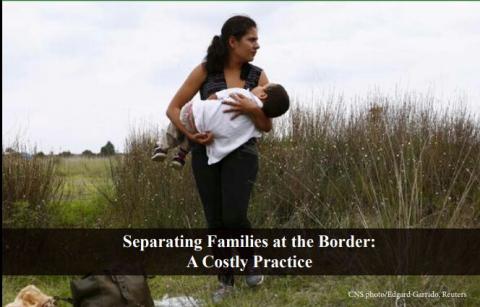 A fact sheet produced by the Justice for Immigrants Campaign, June 1, 2018.

At the end of the Obama Administration and into the Trump Administration, there have been significant increases in the separation of families at the U.S./Mexico border by the Department of Homeland Security’s (DHS) Customs and Border Protection (CBP). Since October 2017, over 700 children have been separated from their parents and rendered “unaccompanied,” including over 100 children under the age of four.(1) On May 4, 2018, DHS stated that it will refer all individuals who cross the border without authorization for criminal prosecution, including adult members of family units.(2)

If implemented, this policy will undoubtedly lead to a drastic increase in incidences of family separation.

An Example of Who DHS is Separating & Detaining:
Maria’s Story

Maria, a young mother, was abused and forced into sex trafficking by a local gang in her home country of Guatemala. Maria eventually escaped this situation and fled to the U.S. with her three-year-old son, Jose, in search of protection. When Customs and Border Protection agents apprehended Maria and Jose at the border, they chose to separate Maria from her toddler, seemingly convinced that she was Jose’s aunt. Consequently, Jose was deemed “unaccompanied” and transferred to the care of the Office of Refugee Resettlement, and Maria was transferred to adult detention. Maria remains detained and has yet to be reunified with her son.

It Will Be Costly to U.S. Taxpayers

Separating families at the border will be incredibly costly – unnecessarily shifting the financial burden of families awaiting immigration proceedings and prosecution to the U.S. taxpayer. Currently, if an individual is not referred for prosecution or detained, the families of those arriving and charitable groups provide assistance. With the policy change, DOJ and HHS – and by extension the U.S. taxpayer – will be required to fund the care and custody of these families.

DOJ found that the average daily cost of detaining an individual with the U.S. Marshals Service was $89.33 in Fiscal Year 2017.(3) Meanwhile, a 2015 Government Accountability Office report estimates that the average cost to the taxpayer to keep an unaccompanied child in an ORR shelter is $248 per day.(4) This means that costs can range up to $585 per night for a family of three (two children, one parent) and will be borne by the U.S. taxpayer. In contrast, exercising discretion in determining who to prosecute and releasing families under certain existing Alternative to Detention (ATD) programs is much more cost effective; ATD programs operated by DHS can cost as little as $5 per person per day (5) and are extremely effective in ensuring compliance with immigration proceedings and orders.

It Will Hinder Judicial Efficiency

Separating families will also impede access to due process and decrease judicial efficiency. Adult detained family members will be placed into separate immigration removal proceedings from their children after separation. This requires unnecessary expenditure of Department of Justice (DOJ) resources on duplicative proceedings that otherwise would be linked. Consequently, the policy will further contribute to the immigration court backlog, which is already over 692,000 cases.(6) Additionally, separating family members may impede their access to evidence and testimony that is essential for efficient processing of their cases and their access to justice.

Children Are Vulnerable and Should Not Be Separated From Their Parents

Family unity is a cornerstone of our American immigration system and a foundational element of Catholic teaching. While there are times when separation is appropriate due to abuse or trafficking concerns, unnecessarily separating families would be extremely detrimental to basic child welfare principles, contrary to our Catholic values, and ineffective to the goals of deterrence and safety.

“Every threat to the family is a threat to society itself. The future of humanity, as Saint John Paul II often said, passes through the family. So protect your families! See in them your country’s greatest treasure and nourish them always by prayer and the grace of the sacraments.”
– Pope Francis

Increasing Prosecutions and Separating Parents From Their Children Will Not Deter Families From Seeking Safety in the U.S.

Such a policy will not cure the pervasive root causes of migration existing in the Northern Triangle of Central America today. Factors such as community or state-sanctioned violence, poverty, lack of educational opportunity, forcible gang recruitment, and domestic abuse are compelling children and families to take the enormous risks of migration, including the possible additional risk of family separation at the border. These are the factors that must be addressed as we look to repair our broken immigration system.

Families at the Border Fact Sheet