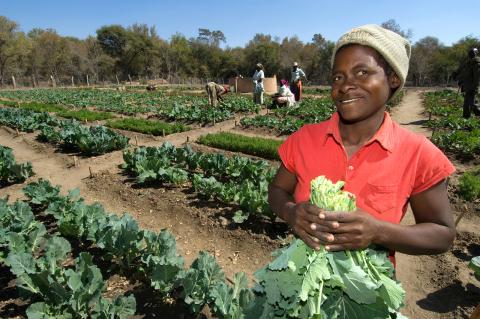 Since the food crises in 2008-2009, a number of programs have evolved to increase investments in African agriculture and rural development. One critical piece that is often overlooked is the important participation of women farmers (who make up the majority of farmers on the African continent) in defining what is needed to end rural poverty and promote people-driven development. At the recent Southern Africa Development Community (SADC) People’s Summit, women took central stage and offered their perspective articulated in Peoples’ Dialogue Press statement.

For ages, mostly women farmers of southern African have used peasant family agriculture to produce most of the food for SADC countries through sustainable and ecologically friendly methods. Over the past 10 years agricultural dumping has increased; many of these family farmers have been driven out of local markets, and out of their own livelihoods. Those that managed to survive had to contend with mega projects, like hydro-electric and bio-fuel plantation projects that displaced and dispersed whole communities; and these projects are only projected to increase as the U.S.’s plans for electrifying Africa unfold.

Perhaps the most threatening invasion to their survival has occurred over the past 3-5 years – since farming has become the "new frontier" for foreign investments with a determined focus on "modernizing" African agriculture. Many of these farmers whose lives and livelihoods lie in the balance gathered at the SADC People’s Summit in August 2013. There they were able to talk freely about the fact that in spite of all this attention, the SADC region suffers from a food production deficit. In fact, farmers are seeing greater levels of poverty and unemployment as result of inappropriate export-led development models, guided by the "dig it up and ship it out" mentality. Basically, peasant-family agriculture is being destroyed as this new model of agribusiness takes hold and as land grabs massively increase throughout SADC countries.

In her opening speech, SADC’s incoming chair, Joyce Banda, president of Malawi, promised to prioritize agriculture and free movement in the region. Since she focused her remarks on agribusiness, southern African women farmers expect a continuation of the same development models that have diminished peoples’ sovereignty and control over their seeds and systems of food production. Of great concern is the notion that the SADC president will provide more opportunities for GMO seeds to further penetrate the region. Women farmers feel that this deeper access will only worsen the current situation because they view GMO seeds as a false solution to the food crisis.

The People’s Summit offered small-scale farmers and rural women from the region an opportunity to engage and share information and farming materials with their Malawian counterparts during a farmers’ exchange field visit in Lilongwe South, organized by the National Smallholder Farmers’ Association of Malawi (NASFAM). In Lilongwe, local women farmers organize the production and market systems for rice and groundnuts – products that have become integral to their community livelihoods. These enterprising women have created local employment through processes that add value to raw products. This exchange of ingenuity and ideas is invaluable to local development.

Farmers at the SADC peoples’ summit expressed grave concerns about the Alliance for Green Revolution in Africa (AGRA), the Comprehensive Africa Agriculture Development Programme (CAADP) and the G8-New Alliance for Food Security & Nutrition. They claim that these programs contribute the destruction of peasant livelihoods.

They demanded that SADC nations implement the 2008 Maputo Declaration commitment to spend 10 percent of their annual budgets to support small-scale farmers in developing their agriculture. They also advocated for gender equity, particularly for rural women and youth to have the right to control and access to arable land and natural resources; they demanded that these rights be enshrined in SADC nations’ constitutions. Furthermore, they advocated for community ownership of natural resources and an integrated SADC mining charter to guide investment and stifle intra-competition by regional governments that would put an end to over-exploitation of mineral resources and labor within the region.