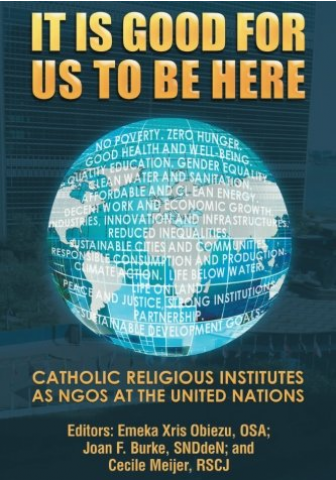 Published in the January-February 2016 issue of NewsNotes.

It Is Good for Us to Be Here: Catholic Religious Institutes as NGOs at the United Nations, edited by Emeka Obiezu, OSA, Joan Burke, SNDdeN, and Cecile Meijer, RSCJ. Catholic women religious sisters, priests, and lay associates representing a multiple of Catholic organizations, including Maryknoll Sr. Claris Zwareva, write about their presence within the system of global governance at the United Nations. Available in Kindle app and hardcopy at www.amazon.com.

Maryknoll Mission Institute 2016: Join continuing education and renewal programs for missioners and others engaged in cross-cultural ministries, sponsored by the Maryknoll Sisters Congregation, in Monrovia and Los Altos, California and Maryknoll, New York. For a description of programs for 2016, contact the Maryknoll Mission Institute at (914) 941-7575, missinst@mksisters.org., or go to https://maryknollsisters.org/program-plan-for-2016/.

Yet Another Victim of the American Dream: Honduran Migrants Speak Out: The Latin America Working Group produced this video of six courageous migrants sharing their personal experiences of the horrors they faced on their journeys north. The video aims to raise awareness of why these migrants risked their lives fleeing their homelands and what hardships they faced along the way, and advocates for more just immigration policies in the United States and Mexico. It is available in English at lawg.org/MigrantsSpeakOut and in Spanish at lawg.org/MigrantesComparten.

Ecumenical Advocacy Days 2016: Plan now to attend Ecumenical Advocacy Days (EAD) in Washington, D.C., April 15–18. The theme is “Lift Every Voice! Racism, Class and Power.” In a major U.S. election year when lives, votes, and the global economy are at stake, followers of Christ ask, “Who has a voice?” Join other Christians in responding, “Everyone!” during a weekend of workshops and information, followed by a visit to Capitol Hill on Monday, April 18. More information is available at www.advocacydays.org, or contact the Maryknoll Office for Global Concerns.

The Global Land Grab: A Primer: Download the second draft of the Transnational Institute’s popular primer on land grabbing, and the economic, social, and political issues related to large-scale land investments in the Global South. www.tni.org/files/download/landgrabbingprimer-feb2013.pdf.

Lemkin Summit to End Genocide and Mass Atrocities: This three-day conference in Washington, D.C. from January 30–February 1, is on efforts to counter mass atrocities and genocide by the U.S., civil society groups, and change-makers on the ground. Conflict areas include Central African Republic, Democratic Republic of Congo, Sudan, and South Sudan. For more information, go to www.enoughproject.org/events/lemkin-summit-2016.