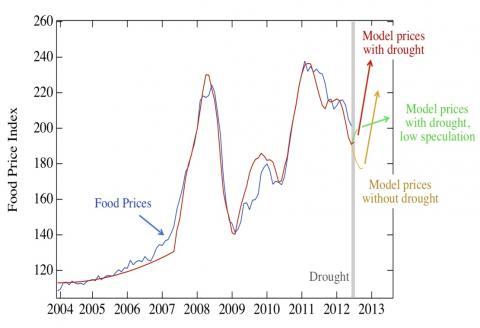 The New England Complex Systems Institute (NECSI), which developed a quantitative model to closely predict the FAO’s food price index, released a report in July predicting sharply higher food prices due in part to excessive speculation. The following article was published in the September-October 2012 NewsNotes.

The NECSI model, originally released in September 2011, matched the FAO’s index from 2004 to 2011. Since then it has continued to closely follow the real world numbers.Unfortunately, the model now predicts, “another speculative bubble starting by the end of 2012 and causing food prices to rise even higher than recent peaks.”While the researchers acknowledge that the drought in the Midwest U.S. will cause prices to rise, their model shows that excessive speculative activity will have an even larger effect. Though some key financial reforms passed in 2010 may finally begin to be implemented in early 2013 that may be too late to avoid the coming price bubble.

“We find that through the mechanism of speculative activity, the drought may trigger the third massive price spike to occur earlier than otherwise expected, beginning immediately, and sooner than what could be prevented by the anticipated new regulations. This spike may raise prices well beyond an increase justified by the reduced supply caused by the droughts… [w]hile the drought only causes a limited price shock, the impact on prices is amplified by the speculative activity,” write the authors. (See graph above.)

As NECSI president Yavni Bar-Yam said, “We are on the verge of another crisis, the third in five years, and likely to be the worst yet, capable of causing new food riots and turmoil on a par with the Arab Spring,” alluding to another study by the NECSI showing that the last two food prices bubbles in 2008 and 2011 correlated with similar increases in violent outbreaks and food riots.

Perhaps most frustrating is that the principal causes of the rising prices are bad public policy: “Each of these causes is due to particular acts of government intervention or deregulation. Thus, while the food supply and prices may be vulnerable to global population increases and environmental change, the existing price increases are due to specific governmental policies. In order to prevent further crises in the food market, we recommended the halting of government support for ethanol conversion and the reversal of commodities market deregulation, which enables unlimited financial speculation.”

Could it be that we are in for another round of unnecessary, destabilizing and dehumanizing violence?