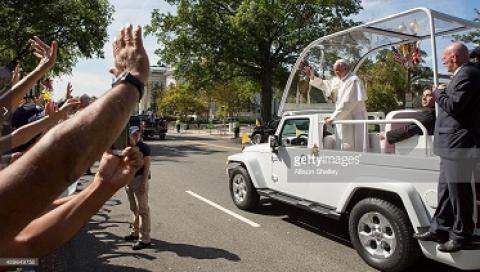 In the morning, the pope delivered remarks at a welcoming ceremony at the White House. He indentified himself with immigrants, and described the urgent need to address climate change. You can read the full transcript here and watch a video of his speech here. Some key quotes:

"As the son of an immigrant family, I am happy to be a guest in this country, which was largely built by such families."

“[C]limate change is a problem which can no longer be left to a future generation.
When it comes to the care of our “common home”, we are living at a critical moment of history."

At the conclusion of his visit to the White House, Francis rode in the popemobile for a parade along the National Mall. The New York Times reported on one especially poignant moment during the parade: a five-year-old girl, the daughter of undocumented immigrants from Mexico, made it through the barricades and was timidly facing security officiers when the pope saw her and told the officiers to bring her to him. One officier lifted her up so she could hand a letter to the pope, asking him to advocate for immigrant families like hers.

In the early afternoon, Francis joined the U.S. bishops for midday prayer at Saint Matthew’s Cathedral. He offered encouraging remarks, urging them to be shepherds who promote dialogue and foster unity in the Church and in society. You can read the full transcript here.  Some key quotes:

“[W]e are promoters of the culture of encounter…”

"Dialogue is our method... I cannot ever tire of encouraging you to dialogue fearlessly."

"Be pastors close to people, pastors who are neighbors and servants."

“[K]now that [immigrants] also possess resources meant to be shared. So do not be afraid to welcome them.
Offer them the warmth of the love of Christ and you will unlock the mystery of their heart.”

At the end of day, Francis celebrated his first Mass in the U.S., the Canonization Mass for Junipero Serra at the Basilica of the National Shrine of the Immaculate Conception. The opening words of his homily were “Rejoice in the Lord always!” He went on to describe how the apathy of daily life can be overcome with the joy of the Gospel. You can read the entire homily here.  Some key quotes:

For the source of our joy is “an endless desire to show mercy, the fruit of our own experience of the power of the Father’s infinite mercy.”

“A Christian finds joy in mission: Go out to people of every nation!”

“Mission is never the fruit of a perfectly planned program or a well-organized manual. Mission is always the fruit of a life which knows what it is to be found and healed, encountered and forgiven. Mission is born of a constant experience of God’s merciful anointing.”

“The holy and faithful People of God are not afraid of losing their way; they are afraid of becoming self-enclosed, frozen into élites, clinging to their own security. They know that self-enclosure, in all the many forms it takes, is the cause of so much apathy.”

“So let us go out, let us go forth to offer everyone the life of Jesus Christ. The People of God can embrace everyone
because we are the disciples of the One who knelt before his own to wash their feet.”