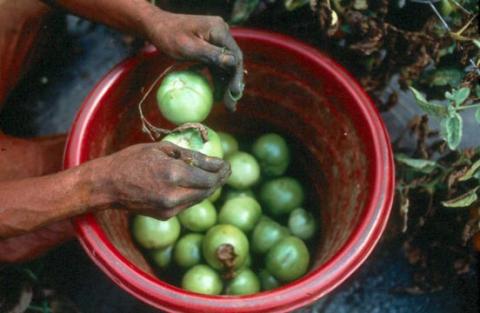 In his [2009] encyclical, Charity in Truth, Pope Benedict XVI expresses concern about the global economy and its overemphasis on profit at the expense of human and community needs. “Without doubt, one of the greatest risks for businesses is that they are almost exclusively answerable to their investors, thereby limiting their social value.” (40) The pope’s solution to this situation is not only government regulation of businesses, but the creation of new business models where human and community effects are considered a fundamental part of the bottom line. In many ways, he describes alternative businesses that are part of the rapidly expanding solidarity economy.

Pope Benedict writes, “Profit is useful if it serves as a means towards an end ... Once profit becomes the exclusive goal, if it is produced by improper means and without the common good as its ultimate end, it risks destroying wealth and creating poverty.” (21) It is clear that “[e]conomic activity cannot solve all social problems through the simple application of commercial logic. This needs to be directed towards the pursuit of the common good” (36 - emphasis in original)

He also points out how merely relying on governments to make the economy more equitable is no longer enough:

“Perhaps at one time it was conceivable that first the creation of wealth could be entrusted to the economy, and then the task of distributing it could be assigned to politics. Today that would be more difficult, given that economic activity is no longer circumscribed within territorial limits, while the authority of governments continues to be principally local. Hence the canons of justice must be respected from the outset, as the economic process unfolds, and not just afterwards or incidentally.” (37)

Throughout the world millions of people involved in grassroots initiatives work every day to create an integrally just economic system through the formation of businesses in which workers are co-owners and/or are involved in making business decisions. These new forms of businesses are also committed to environmentally sustainable practices.

The city of Cleveland is a good example of how these businesses can work together to provide decent livelihoods and a stable local economy. A traditionally industrial town, Cleveland has been heavily affected by globalization, with its corporate leaders moving huge portions of its industries overseas in order to take advantage of lower wages and weaker environmental -- and other -- regulations. The result was massive deindustrialization, skyrocketing unemployment and urban blight. To rebuild their local economy, city leaders decided to focus on “anchor industries” as the center of an economic renaissance.

Hospitals and universities are large institutions that are unlikely to be “offshored” like manufacturing industries. With local businesses established to supply these anchor industries, more secure jobs in the city’s poorer neighborhoods were created. It began with a laundry cooperative to supply a number of hospitals; now there are workers cooperatives that install solar panels in these anchor institutions and retrofit buildings to be more energy efficient. A recently started urban garden run by a workers cooperative will supply food to the anchor institutions.

Without siphoning off money to pay exorbitant CEO incomes and corporate dividends, workers in cooperatives tend to make higher incomes while also building up equity ownership accounts worth tens of thousands of dollars – for many of the workers, the first time they have had any significant savings. And being co-owners of the business, they are more likely to stay on the job, creating much more stability in previously precarious neighborhoods.

“Rather than just being a business that talks about the ‘triple bottom line’ of people-planet-profit, we have put it into our corporate structure so that we are required to do it,” said one benefit corporation member. “We’ve made it so we are unable to violate our own business principles.”

Benefit corporations, on the other hand, are a newly recognized class of business that includes social and environmental goals in its statutes and founding charter but are not assessed by a third party to verify if they meet those goals. At least four states (Vermont, New Jersey, Maryland and Virginia) officially recognize benefit corporations, and lawmakers in California, Hawaii, Colorado, Michigan, New York, North Carolina and Pennsylvania have introduced legislation to recognize them.

In an article printed in the June 27, 2011 issue of The Nation, Maryland State Senator Jamie Raskin explains well the benefits of being a benefit corporation: “[W]hy would public-spirited corporations embrace these exacting duties when they can simply roam free and do a little bit of altruistic good on the side? For one thing, Benefit Corporations can’t be held liable by courts for failing to place profits over everything else. This is an important shift in law. The fear of shareholder litigation has driven many public-spirited businesses, most famously Ben & Jerry’s, to take the high bid rather than the high road in a corporate takeover fight. Becoming a Benefit Corporation declares legal independence from the profits-über-alles model. More important, having Benefit Corporation status sends a powerful message to shareholders, employees, business partners and consumers about what kind of company you’re running. The signal generates instant branding, internal cohesion, consumer enthusiasm and links to a vibrant national B Corp network that brings in more than $4.5 billion in revenues.”

Most participants in these alternative business models would agree with Pope Benedict that “[w]ithout internal forms of solidarity and mutual trust, the market cannot completely fulfill its proper economic function” (35) and that “[w]hat is needed, therefore, is a market that permits the free operation … of enterprises in pursuit of different institutional ends. Alongside profit-oriented private enterprise and the various types of public enterprise, there must be room for commercial entities based on mutualist principles and pursuing social ends to take root and express themselves.” (38)