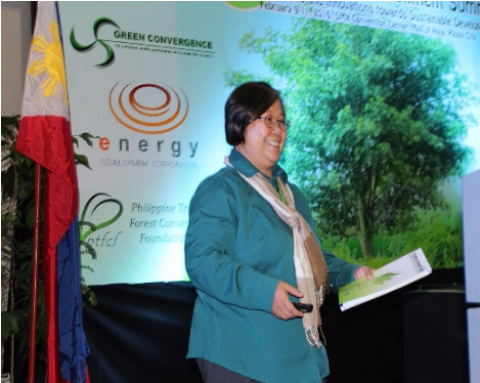 The “First Philippine Environment Summit: Breakthroughs and Innovations toward Sustainable Development” was held in Manila in February to address environmental issues that impact sustainable development. More than 1,000 participants from various sectors of society in the Philippines attended the three-day conference. The following article, published in the March-April 2016 issue of NewsNotes, was written by Maryknoll Sister Marvie Misolas, who was a part of the planning process and a speaker at the summit.

Almost two years ago, I was asked to facilitate a planning session for the board of directors of Green Convergence Philippines, a coalition of environmental NGOs and individual environmentalists. Focused on the theme “One Vision, One Earth,” we identified the need for a summit on the environment in the Philippines, to bring together representatives from government, academia, faith groups, and civil society organizations to highlight the importance of concerted action to effectively resolve environmental problems. The three-day summit was successfully held in Manila in February. The theme was “Greening Together, Growing Better.”

The summit was co-hosted by the Department of Environment and Natural Resources (DENR) thanks to the strong support of DENR Secretary Ramon Paje. Secretary Paje was especially supportive of the summit’s aim to convene stakeholders of the country’s environment, not only to dialogue about deeper environmental issues but also to showcase solutions and innovations implemented in the Philippines. He envisioned the possibility of institutionalizing the summit as an annual event. This way, he hopes, whoever holds the position of Environment Secretary will be held accountable to the Filipino people and the environment. Other major stakeholders in the environmental movement including renewal energy sectors, sustainable development institutions, environment NGOs, television networks and the Maryknoll Sisters joined the summit as sponsors.

Secretary Paje delivered his annual State of the Philippine Environment address where he highlighted the successes of his six-year term in the office. The National Greening Program of the country topped the list. The five-year reforestation program aimed to plant 1.5 billion trees in 1.5 million hectares of deforested and denuded land. To the joy of the summit participants, he reported the discovery of 400 islands in the eastern part of the Philippines, detected by satellite mapping radar. He clarified the issue of prospective power plants which were approved prior to his term of office. He promised that under his leadership, no new power plants will be approved, and no environment clearance certificates will be issued to operate new coal power plants.

The summit also included keynote addresses by renowned environmentalists Vandana Shiva and David Suzuki. Also, Secretary of Education Armin Luistro highlighted the greening of education and schools, creating a new generation conscious of their role in protecting and respecting nature.

Former Manila Archbishop, Cardinal Rosales gave an inspirational talk on the role of the Church in the southern Philippines where there is rampant deforestation by powerful illegal loggers. He said the Church has risen to protect the environment, even to the martyrdom of pastors and members of their staff, whose blood marks the injustices done to land and the environment. He further said that the Church has been fighting all these abuses, long before Pope Francis’ encyclical Laudato Si’.

At the closing ceremony, I gave a summary presentation of a national project I have been working on with the DENR since 2014 which was honored at the summit as one of 14 local government unit (LGU) eco-champions for excellence in environmental governance and practices. I also highlighted the excellent eco-governance of the 13 other LGU eco-champions. All 1,663 LGUs in the Philippines were surveyed as to their compliance to 13 Philippine environmental laws and regulations such as Climate Change Act, Clean Air Act, Clean Water Act, Disaster and Risk Reduction Management Act, the Ecological Solid Waste Management Act. A total of 172 responded to the survey. Of those, 14 LGUs were recognized as eco-champions.

Exhibitors at the summit showcased projects on low-impact water management technology, solar energy technology, bioremediation and organic cleaning of pollutants and other eco-system management and restoration, and organic farming. The Maryknoll Ecological Sanctuary in Baguio was among the exhibitors.