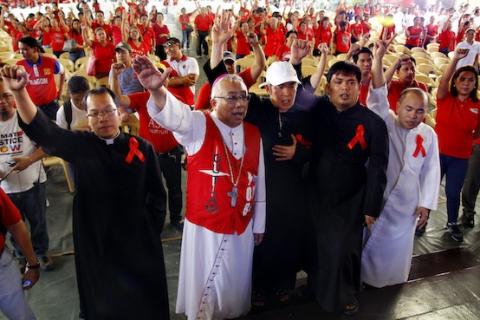 The following article about Philippine church leaders launching the global call to "break free from coal" in Quezon province, dubbed as the "coal capital" of the Philippines' island of Luzon, was published in the Union of Catholic Asian News (UCAN)  with the headline "Catholic leaders help launch anti-coal drive in Luzon" on April 12. The following article was published in the May-June 2016 issue of NewsNotes.

“It is immoral to burden future generations with pollution and the cost of mistaken energy choices made today,” said Archbishop Ramon Arguelles of Lipa.

Archbishop Arguelles said that as the Philippines prepares for this year's national elections, Filipinos should elect leaders who “will do everything to protect Filipino families from the ravages of dirty energy and climate change.”

The prelate spoke before members of civil society groups who gathered in Lucena City for the launch of “Piglas Pilipinas," a local counterpart of the global climate movement "Break Free from Fossil Fuels 2016.”

Father Raul Enriquez of Pagbilao said the advocacy for renewable energy and the clergy's anti-coal stance “is deeply rooted in our yearning for the renewal and transformation of lives and communities.”

“It is time to break free from fossil fuels and hold the big polluters and the government to account to ensure a safer future for Filipinos,” said Anna Abad, climate justice campaigner for Greenpeace in Southeast Asia.

Environmental activists noted that the Philippines has committed a 70 percent emission reduction in international negotiations on climate change but continues to build coal plants.

“We stand firm on our demand; shift to renewable energy, the time to act is now. We strongly support the call to break free from coal,” said Louise Alcalde, advocacy officer of the group Aksyon Klima.

Aaron Pedrosa, head of the energy working group of the Philippine Movement for Climate Justice, acknowledged the need to organize people on the ground “who are at the frontlines of resistance against coal.”

The event on April 12 was part of build-up activities leading to a 10,000-strong mobilization on May 4 that will call for a stop to the building of a 600-megawatt coal plant in Batangas City.

Other protest activities are also scheduled until May 15 in other countries,  which include Indonesia, Nigeria, Brazil, the United States, Germany, and Australia.

Faith in action: Learn more about the “Break free from coal” campaign in the Philippines at https://philippines.breakfree2016.org.

In the United States, the “Break free” campaign will be held across the country May 4-15. There will be a “global wave of mass actions” targeting the world’s most dangerous fossil fuel projects, in order to keep coal, oil and gas in the ground and accelerate the just transition to 100 percent renewable energy. Learn more at https://breakfree2016.org/.