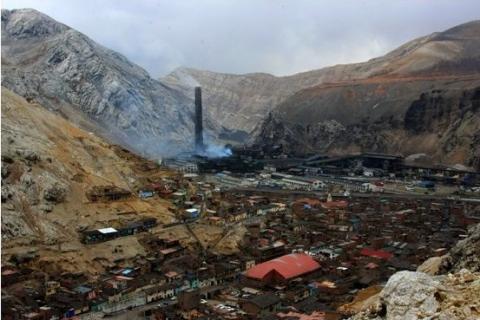 On June 8, the U.S.-based company that owns the infamous and now-shuttered lead smeltering plant in La Oroya reintroduced a lawsuit claiming that the government of Peru violated a trade agreement and cost the company profits by establishing regulations to protect the environment in La Oroya. The following article was published in the July-August 2017 issue of NewsNotes.

La Oroya, Peru, a small city about 90 miles north of the capital of Lima, is considered one of the most contaminated cities in the world. The smeltering plant for copper and lead that had been in operation in La Oroya since 1922 is to blame.

In fact, in 2007, La Oroya was rated as one of the ten most polluted cities in the world by the Blacksmith Institute, a New York-based environmental group. The hills around the smelter had been reduced to a moonscape by sulfur dioxide from the smelters; the river was polluted by untreated water from the smelter; the soil in the city and surroundings had become contaminated with lead; the people in the city, including more than 90 percent of the children, had dangerous levels of lead in their blood and many had bronchial troubles.

The Doe Run Company, whose parent company is the U.S.-based Renco Group, purchased the smeltering plant in 1997. When the government demanded that the company conduct remediation for the lead poisoning, the company refused for years. Doe Run declared bankruptcy and shuttered in 2009 and Renco sued the government of Peru under the Peru-U.S. trade agreement in 2011.

The case was not held in just any court. Trade courts are extrajudicial courts outside of national or international jurisdictions. Trade agreements are the law of the land. In the U.S., these cases are heard in the International Center for the Settlement of Investment Disputes (ICSID) within the World Bank. Companies bring forth these suits when they believe their investment has been inhibited in some way. In this case, the Renco Group sued because the Peruvian government refused to bend environmental regulations.

These courts and the investment chapter within trade agreements are designed to put the rights of corporations above the rights of civil society, the government, and nature.

After years of litigation in the ICSID, Peru won the case on a technicality in July 2016 as previously reported in NewsNotes. On June 8, Doe Run reintroduced the suit, having fixed the technical issue in their first suit. So far, no official notice of intent has been made public.

Peru’s president, Pedro Kuczynski, a former investor banker, has named restarting the mining operations in La Oroya as a top priority. The Kuczynski administration is now proposing to increase limits on air contaminants.

The investors have tried to auction off the mine and smelter plant but no company wants to buy the plant and be saddled with the liability from the pollution, labor contracts, and needed infrastructure modernization.

Investor-state cases such as this are costly to the governments. Under the previous suit, the Renco Group sued Peru for $800 million and now even more money is at stake for the government of Peru. Every year, Peru includes money in their national budget for these trade disputes.

Additionally, these investor courts can also act as a de facto appeals court when a case is decided at the highest level of a national court that does not favor the corporation. Even when countries win, they actually still lose. The court cases are opaque and it is difficult for civil society to have a voice in the room.

Maryknoll Sister Patricia Ryan works with the Human Rights and Environment Association (DHUMA) in Peru. They offer trainings for indigenous communities on their rights and have a team of Quechua and Aymara lawyers to defend communities when the government fails to respect their rights. These cases are often related to mining and other extractive projects.  In 2015, the ICSID accepted an amicus brief from DHUMA in another trade dispute case, Bear Creek vs. Canada. For the first time, civil society representatives were able to be present in the court room as observers and they livestreamed the event.

While injustice continues for the people in La Oroya, there have been other recent victories for governments in other cases. Last year, Australia and Uruguay both won cases brought by Philip Morris related to anti-smoking laws. In October, El Salvador fended off a suit from the mining company Pacific Rim (now Oceana Gold) over a country-wide mining moratorium; and in March, Canada won a suit brought by Eli Lilly for refusing patents for two medications.