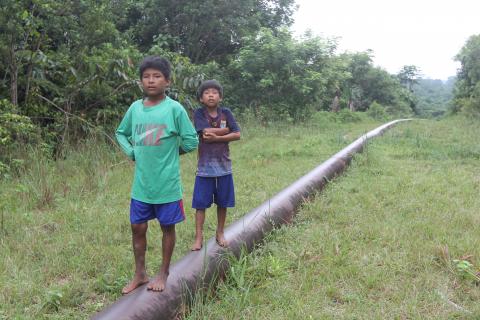 The following article was written by Barbara Fraser, who has lived for more than two decades in Peru, formerly as a Maryknoll Lay Missioner and currently as a freelance journalist, based in Lima. It was published in the March-April 2017 issue of NewsNotes.

Growing up in a village along Peru’s Tigre River, Julia Chuje Ruíz watched the streams and lakes turn black after oil drilling began in the 1970s.

For decades, the polluted streams and river were the only source of water for washing, cooking, bathing and drinking in the community of Vista Alegre. Not far from the river, Chuje buried her teenage son during an epidemic in which most of the villagers’ children died, vomiting blood.

She blames the pollution, although the deaths might also have been due to diseases that arrived with oil company workers.

More than four decades of oil production in the northern Peruvian Amazon have fouled the forest with toxic waste and radically changed the lives of the thousands of Awajún, Kichwa, Kukama and Urarina people who live along five major rivers that are overlapped by oil leases. A world traditionally governed by hunting and fishing and the seasonal rise and fall of floodwaters is now marked by oil drilling and cleanup of spills.

Until the early 1990s, Peru had no environmental regulations that effectively controlled oil pollution. And although regulations exist now, more than 1,000 sites await cleanup, according to a government count.

Meanwhile, a series of spills from aging pipelines that ferry crude from the Amazonian oil fields to a refinery and port on Peru's Pacific coast have drawn more attention to the pollution and galvanized protest.

In June 2014, a pipeline operated by Petroperú, the state-run oil company, spilled about 2,000 barrels of crude near the Kukama Indian village of Cuninico, a community of wooden, thatched-roof houses on the bank of the Marañón River.

Despite cleanup efforts, oily bubbles still ooze from the sediment beneath the pipeline, and villagers say the fishing on which they always depended for food and income has not recovered. Nearly three years after the spill, potential customers avoid buying fish from Cuninico.

When Flor de María Parana, one of the animators of the village's tiny Catholic community, testified before the Inter-American Commission on Human Rights in June 2016, she said children broke out in rashes if they bathed in the river that had always been their source of water for washing, cooking and drinking.

Families now put out buckets during rainstorms to catch water cascading from their tin or palm-thatch roofs, she said, but when days pass without rain, they must resort to using river water.

A dozen more pipeline spills followed the leak in Cuninico. While government inspectors attributed that spill to corrosion of the aging pipeline, Petroperú say most of the rest were the work of vandals. The company has accused no one directly, and community members say they are being blamed unfairly.

Oil pollution came to the lower Marañón River hand-in-hand with radical changes. A huge oil slick from a barge spill upstream blackened the river from bank to bank in 2000, recalls the Rev. Miguel Angel Cadenas, a Spanish Augustinian who worked for two decades among the riverside villages.

That disaster received little attention, but recent spills have drawn more scrutiny on social media. Journalists have reported on the oil spills and a human rights lawyer is working with village leaders who sued government agencies for negligence.

In September 2016, residents of dozens of indigenous communities blocked the Marañón River to protest the spills and decades of government neglect. The protest lasted more than 100 days as government ministers and indigenous leaders met in Saramurillo for talks.

The protest ended just before Christmas, with a series of agreements which have yet to be implemented.

Many of the oil drilling and spills are less visible, yet they have had complex, lasting economic impacts. Each spill has created dozens, sometimes hundreds, of cleanup jobs—dirty, dangerous work that pays better than any other work available in the area. With the influx of workers and cash, prices rise and families have invested in home improvements, boat motors, generators and appliances.

Once the jobs are gone, though, uncertainty sets in as people wonder if the water is safe to drink and the fish are safe to eat, and as they try to replace the lost income.

The night the final accord was signed, ending the protest in Saramurillo, Julia Chuje Ruíz  said she would not stay for the closing celebration.

"How many months have we waited to sign?" she asked. "When I see things change, that's when I'll celebrate."