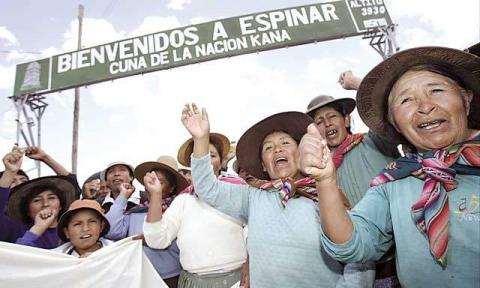 For the past several months, Peruvian citizens in the province of Espinar have been calling for dialogue with the Anglo-Swiss mining company Xstrata Tintaya to address environmental, health and social concerns. They are asking for an investigation into presumed environmental damage and an increase in the company’s contribution to local authorities. The following article was published in the July-August 2012 NewsNotes.

After a week of protests at the Tintaya Marquiri copper mine, violence erupted on May 27 between demonstrators and police. By May 29, two civilians were reported killed along with many more injured, including police officers. Although Peru’s Prime Minister Oscar Valdes stated that emergency measures (such as suspension of assembly of freedom and giving special powers to the police) taken by the government were to restore order, police abuses were reported by civilians and human rights advocates.

Those abuses include the illegal detention on Xstrata’s mine site of Jaime Cesar Borda and Romualdo Tito Pinto, employees of the Vicariate of Solidarity of the Sicuani Prelature. They, along with 20 other civilians, were held in a make-shift police station for two days. (The mayor of Espinar, Oscar Mollohuanca, was among those arrested for protesting.) The Catholic Church, through the Vicariate of Sicuani, sent lawyers to visit those illegally detained on Xstrata’s property. The lawyers report that those imprisoned had their shoes removed and heels beaten, that they were verbally abused, kept in frigid conditions and deprived of sleep.

In addition to Cesar Borda and Tito Pinto, Sergio Huamani, a representative of the United Front for the Defense of the Interests of Espinar, was beaten at the scene of the arrests. Just a month prior to this confrontation, Sergio had participated in talks in London with representatives from Xstrata Tintaya, who promised to look into his group’s concerns regarding the Tintaya mine.

It appears that the Peruvian government and the Espinar community are in negotiations, trying to prevent this kind of violence and conflict from occurring again. After authorities and representatives began their round table discussions on June 21, Peru’s president, Ollanta Humala, lifted the state of emergency on June 23. The next round table discussion will take place on July 12 and will include representatives from Xstrata Tintaya, as well. Maryknoll missioners in Peru will be monitoring and updating our office on any developments with the situation.