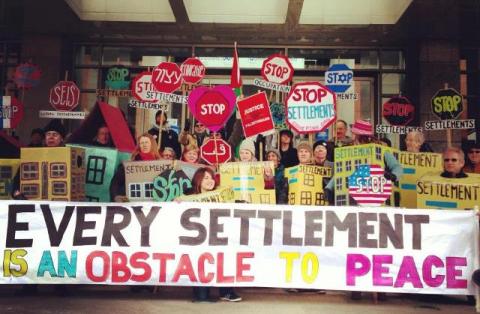 In early March, the American Israel Public Affairs Committee (AIPAC) held its annual conference in Washington, D.C.; outside their meeting site, dozens of protesters participated in a public witness to call an end to illegal Israeli home constructions – settlements – on Palestinian land. The settlements have been a serious blow to the peace process between Israel and the Palestinians in recent years. In January, Pax Christi International, the Catholic peace movement, released the following statement. (The Maryknoll Office for Global Concerns is a member of Pax Christi International.)

Photo of activists outside AIPAC conference by Lena Ibrahim, courtesy of CodePink

Given an uncertain post-election political landscape in Israel, Pax Christi International calls attention to an issue which was largely neglected in the Israeli election campaign and is not nor looks to be a priority in the negotiations about the formation of a new Israeli government: the illegitimacy of the Israeli occupation and the continuation of the settlement policy.

1. In a recent statement, Pax Christi International urged the international community to avoid supporting in any way ... the settlement business. "In the Foreign Affairs Council of May 2012, the EU member states supported the correct labelling of Israeli settlement goods. As done by the UK and Denmark, each member state, should, as a minimum measure, come forth with concrete procedures to ensure correct labelling of all settlement products." Pax Christi International asks the EU Foreign Affairs Council to urge its members to implement this principle of correct labeling.

2. Pax Christi International considers the above-mentioned appeal all the more relevant and urgent in view of the Israeli announcement in December of the expansion of Jerusalem in northeastern (area E1) and southern (Bethlehem area) directions, making continuity between the northern and southern part of the West Bank increasingly problematic, and underlining Israel’s undeclared policy of making a two-state solution out of touch with reality on the ground.

3. Therefore, urgent action is needed by the international community to stop this process. In a new report the Palestinian Human Rights organization Al Haq pointed out that "although the EU repeatedly states that Israeli settlements in the West Bank are illegal under international law, it continues to allow settlement products to enter its markets. The EU is Israel’s largest trading partner, receiving about 20 percent of total Israeli exports."

4. According to Al Haq, settlements in the Jordan Valley – the large swath of fertile agricultural land in the West Bank that is dominated by Israeli agribusiness – contribute 40 percent of herbs, 50 percent of grapes and 40 percent of dates exported by Israel. "The flourishing agricultural environment in the West Bank, particularly in the Jordan Valley area, coupled with the exploitation of water and other natural resources found in the occupied territory, has … turned Israeli settlements into profitable corporations," says the report.

5. Pax Christi International supports Al Haq’s statement regarding EU’s position: "As things stand, the EU is doing little more than ticking a box by acknowledging that settlements are illegal. Until they support this rhetoric with action and ensure that no assistance or recognition is provided to settlements, even indirectly, any such criticism will continue to be meaningless."

6. While criticism by itself is a political and diplomatic fact and important, it is also clear that given the grave situation on the ground, additional urgent actions are required with regard to the settlement process.