Hosanna! Blessed is he who comes in the name of the Lord! Blessed is the kingdom of our father David that is to come! Hosanna in the highest!
MARK11:9-10

From our 2018 Lenten Reflection Guide: Embracing Jesus' Practice of Nonviolence

But Jesus rides on a donkey. In eastern cultures, like the one in which Jesus lived, the donkey was considered an animal of peace; the horse was a war animal. A king riding a horse intended to wage war, and one who rode a donkey was conveying a message of peace. Riding a donkey into Jerusalem symbolized Jesus’ entry as the Prince of Peace.

The reign of God that Jesus announces during his ministry is a reign of peace and nonviolence. The first reading is from Isaiah, chapter 50, and is part of the third Song of the Suffering Servant:  “I gave my back to those who beat me, my cheeks to those who plucked my beard; my face I did not shield from buffets and spitting.”

The second reading from Philippians continues with: “[Christ] emptied himself, taking the form of a slave, coming in human likeness, and found human in appearance, he humbled himself, becoming obedient to the point of death, even death on a cross.”

The reading of the Passion on Palm Sunday completes this reflection. In his book Jesus, An Historical Approximation, Father José Antonio Pagola reflects on the death of Jesus and concludes, “Jesus understands his death as he always understood his life:  as a service to God’s reign for the benefit of all. Day by day he has poured out his life for others; now if necessary he will die for them.”

Those of us who receive our palm branches, who attempt to follow Jesus and announce the reign of peace, are called to this same commitment to serve others, without reliance on great sources of funds, without the use of manipulations, with respect for the dignity of our neighbors, and without weapons of destruction, like the latest missiles and drones.

We all know someone who, despite tragedy and hardship, gives of herself or himself with such dedication and cheerfulness, that you wonder how they do it. Where do they find the strength and the determination to go on?

Often in being humbled by life’s losses and suffering, we are offered the gift of faith, and with it, the love that sustains and calls us to be more than we think we are. For Maryknoll’s founders, the heart of being a missioner is love expressed with joy. In serving, in being humbled by our vulnerability when immersed in a strange culture, we lose ourselves – only to encounter Jesus in new ways.

Remember a time when you have suffered a loss. Did you receive the gift of faith and a sustaining love in some way? What did you learn?

God of surprises, help each of us to find, as matryred Maryknoll Sister Ita Ford said in a letter to her neice on the occasion of her sixteen birthday, “that which gives life a deep meaning.”

“Something worth living for,”

“maybe even worth dying for,”

“something that energizes you, enthuses you, enables you to keep moving ahead.”

“I can just encourage you to start looking, and support you in the search.”

Oh, Wounded Healer, we pray for courage and strength to start looking, and for the support of Sister Ita and the communion of saints as we keep moving forward on the path of peace. Amen.

Fast from technology. Turn off your cell phone, computer, television. Use that time to care for your relationship with God, the earth, yourself, and others. Go for a walk, explore nature, seek out conversation with neighbors, especially those who are lonely.

Learn more about the work of the Interfaith Center on Corporate Responsibility (ICCR). The Maryknoll Sisters and the Maryknoll Fathers & Brothers are members of this coalition of shareholder advocates who view the management of their investments as a catalyst for change. ICCR members engage hundreds of corporations annually in an effort to promote greater corporate accountability on questions such as climate change, corporate water stewardship, sustainable food production, human trafficking and slavery in global supply chains and increased access to both financial and health care services for communities in need. http://www.iccr.org/ 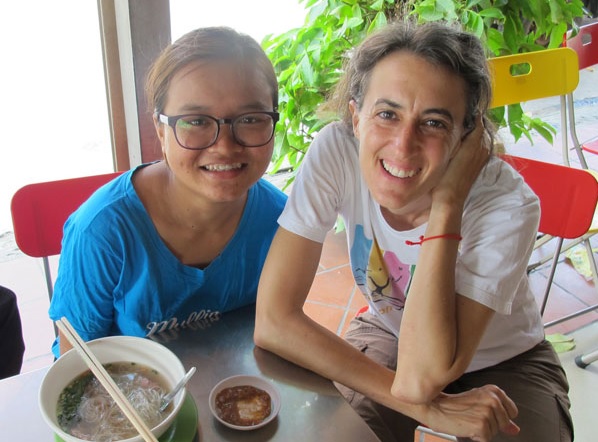 “Cambodia is a country with one of the highest economic growth rates in the world. But in a country plagued by corruption, such growth does not mean a more manageable standard of living. Rather, it means a growing divide between the haves and have-nots. Pedaling though the streets of Phnom Penh, I pass women carrying baskets of produce on their heads to earn $30 a month as I dodge luxury cars whose owners paid $100,000 for their prize.

“Complicit in this are other nations, near and far, who pull on ends of the supply-demand chain. Entrepreneurs with eyes on Cambodia’s resources build roads sufficient to haul out anything above and below the surface that is of value—trees and rice, gold and copper, power from her rivers and oil from below her waters, cheap factory work from her daughters and sweat labor from her sons.

“We think we need products so we need the resources—materials, power, people—to make them.

“This has dire consequences for the Cambodian people and their land. Maryknoll works with those who live in the path of development projects and are forced to relocate. Thanks to deforestation, there is hardly a cool season and flood waters rise every year, threatening harvests and livelihoods. Families are forced to sell their land—and their daughters.

“Do we see the connection between our demand for products and the ramifications for nations like Cambodia?”

– MARIA MONTELLO, Maryknoll Lay Missioner
Pictured on right with a student in Cambodia