Pacem in Terris and the new challenge of peace 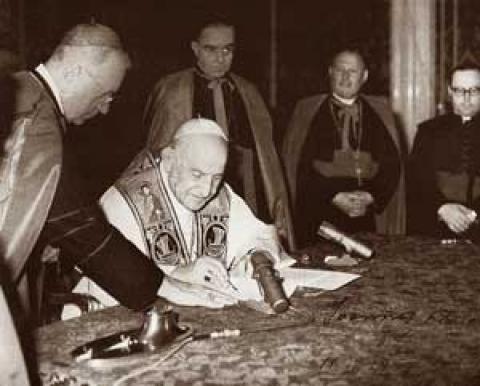 Two notable characteristics of Pope John XXIII’s great encyclical, Pacem in Terris, written almost 50 years ago in 1963, were its scope and its optimism. The sweeping content of the document says relatively little directly about war, concentrating instead on describing the kind of political, social, economic and cultural conditions that generate peace/shalom on earth – right relationships based on justice, respect, love and solidarity – from the interpersonal to the national to the global. The following reflection is written by Marie Dennis.

The "rights and duties" the document holds up as "universal and inviolable and therefore altogether inalienable" are incredibly far-reaching. Many of them, including the most basic, are in need of urgent attention in these times. A few examples:

Pacem in Terris also emphasizes the right role of government, based upon the principal of subsidiarity, and insists on the inadequacy of the modern state to ensure a globally inclusive and sustainable common good: "Today the universal common good presents us with problems which are world-wide in their dimensions; problems, therefore, which cannot be solved except by a public authority with power, organization and means co-extensive with these problems, and with a world-wide sphere of activity. Consequently the moral order itself demands the establishment of some such general form of public authority…But this general authority equipped with world-wide power and adequate means for achieving the universal common good cannot be imposed by force. It must be set up with the consent of all nations. If its work is to be effective, it must operate with fairness, absolute impartiality, and with dedication to the common good of all peoples." (Paragraphs 137,138)

A second notable characteristic of Pacem in Terris is its optimism. For example, paragraph 40 talks about the "progressive improvement in the economic and social condition" of workers; paragraph 42 says "soon no nation will rule over another and none will be subject to an alien power; paragraph 43 – "nor is any nation nowadays content to submit to foreign domination" and "[t]he longstanding inferiority complex of certain classes because of their economic and social status, sex, or position in the State, and the corresponding superiority complex of other classes, is rapidly becoming a thing of the past." That kind of optimism would be very hard to sustain in these times.

Pacem in Terris does, of course, speak directly to the arms race. Fifty years later, the need for disarmament is even more urgent. For too many people and nations, a major component of the fabric of life is war - preparing for war, struggling to survive in the context of war, and dealing with its consequences. We know that 90 percent of the casualties of modern wars are civilians. The human and environmental cost is enormous: millions of refugees roam the earth, a sea of landmines and cluster bombs make many communities uninhabitable; psychological trauma resulting from war destroys families and communities; war exacerbates climate change, deforestation and other environmental problems; and the economic cost of war and perpetual preparation for war is a huge burden on the backs of the poor.

Pacem in Terris brings a tremendous challenge to a highly militarized and nationalistic U.S. foreign policy and to a contemporary global economy that benefits a few very wealthy and powerful people, while leaving millions in dire poverty and the whole earth community threatened.

Clearly, on this 50th anniversary of Pacem in Terris (and 30th anniversary of the U.S. bishops’ 1983 pastoral letter on peace), there is a new challenge of peace confronting the human community. It keeps these rich and powerful documents as relevant as they were decades ago.