Our vision of a culture of nonviolence 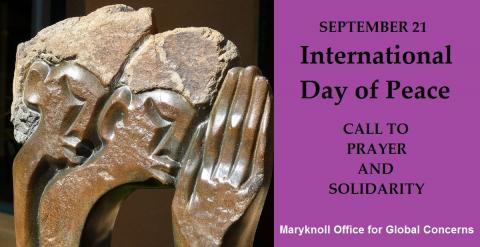 International Day of Peace is observed around the world on September 21. Find ideas of things you can do individually or as a small group to celebrate the day HERE.

Amid the reality of conflict and violence around the world, the Catholic Nonviolence Initiative is working with peacemakers to cultivate seeds of peace. The following article was published in the July-August 2017 issue of NewsNotes.

We have a dream of peace flowing like a river. We have a vision of a culture of nonviolence. We believe that, as Pope Francis tells us, it “is not an unattainable dream, but a path that has produced decisive results.”

The reality of global violence is at points daunting: North Korea successfully launches an intercontinental ballistic missile capable of reaching the United States, bringing the possibility of nuclear war even closer. Wars and conflicts go on in the Middle East, Afghanistan, South Sudan, Somalia, the Philippines, and Myanmar. In the U.S., gun violence is epidemic and some politicians’ violent rhetoric encourages attacks against immigrants, mosques and synagogues, and African-Americans.

The work of the Catholic Nonviolence Initiative (CNI), of which the Maryknoll Office for Global Concerns is a founding member, is to share the good news that creative and active nonviolence is successful and being used by courageous practitioners around the world.

In Colombia, Fr. Francisco de Roux, SJ is promoting reconciliation and dialogue, helping to bring peace after 50 years of war. Last month FARC rebels handed over the last of their weapons and Pope Francis announced he will visit Colombia in September in anticipation of a conclusion to the peace accords. Francisco also is working on one of the CNI ‘roundtables’ that is documenting best practices in nonviolence, sharing insights with the Vatican as it develops Catholic social teaching on nonviolence.

In South Sudan, where a brutal civil war has caused famine and death, and forced much of the population to become internally displaced, leaders of Catholic religious communities recently celebrated the power of nonviolence even in such dire circumstances. A group of 46 brothers, sisters, and priests, belonging to 25 religious congregations, all members of the Religious Superiors’ Association of South Sudan, released a message in response to Pope Francis’ 2017 World Day of Peace message on nonviolence. Their message, entitled  “Active nonviolence: A way to build lasting peace in South Sudan,” names signs of hope: the resilience of the people in promoting peace talks; Church personnel sheltering vulnerable civilians; a new peace center in Kit that offers trauma healing and nonviolence training.

Even while acknowledging suffering and death, these faithful members of the Church of South Sudan see reasons for hope. They remember their colleague, Holy Spirit Missionary Sister Veronika Rackova, (SSpS), a doctor who was gunned down by soldiers while driving an ambulance in Yei in May. “Her mission was to save lives and her sacrifice an action of active nonviolence,” the group says in their statement. They invoke the words of Pope Francis: “to act in this way means to choose solidarity as a way of making history and building friendship in society. Active nonviolence is a way of showing that unity is truly more powerful and more fruitful than conflict.”

Their message concludes: “We have understood, however, that nonviolence entails self-sacrifice and are convinced that active nonviolence is a good way to build a just and lasting peace in South Sudan. So, we reaffirm our commitment to make all effort to build peace through active and creative nonviolence.”

In the United States, the Archdiocese of Chicago has initiated a campaign of nonviolence to counter the epidemic of gun violence in that city. Pope Francis took note of this and sent a letter to Cardinal Blase Cupich addressed to the people of Chicago on April 4, the anniversary of Martin Luther King’s assassination, saying:

“I assure you of my support for the commitment you and many other local leaders are making to promote nonviolence as a way of life and a path to peace in Chicago. I urge all people, especially young men and women, to respond to Dr. King's prophetic words and know that a culture of nonviolence is not an unattainable dream, but a path that has produced decisive results. The consistent practice of nonviolence has broken barriers, bound wounds, healed nations—and it can heal Chicago.”

“It gives us a platform to speak not just about peace-building projects in our neighborhood but, as we are discussing now in the United States, about our budget that includes a massive increase in military spending and the way that is proposed that we cut back on world development aid. These issues are all linked together, and so by having the Holy Father join in our project we also get to join in his project of peace building throughout the world.”