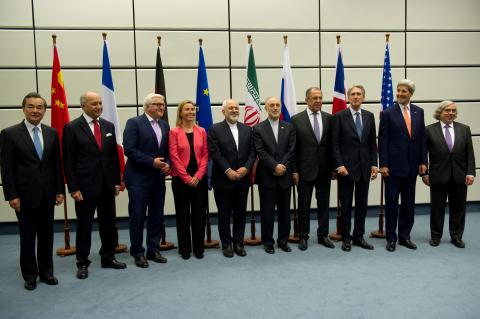 President Biden has several critical opportunities to address the threat of nuclear weapons. This article was published in the March-April 2021 issue of NewsNotes.

As President Biden begins his term, nuclear weapons remain one of the gravest threats facing the new Administration and the world. On January 27, the Bulletin of the Atomic Scientists announced that the Doomsday Clock will remain at 100 seconds to midnight, signifying the seriousness of the nuclear threat. The symbolic clock’s hands move further or closer to midnight, representing the apocalypse, according to an annual global threat analysis by a board of experts which includes 13 Nobel laureates.

The clock was first set to 100 seconds to midnight – closer than ever before, including at the height of the Cold War – in 2020. While the board points to some small positive advances in the last year, it notes that failure to adequately confront the COVID-19 pandemic has confirmed and heightened dire concerns about the technological spread of misinformation and science denialism and a general breakdown in international cooperation, all of which hinder humanity’s ability to address the twin existential threats of climate change and nuclear weapons.

At the same time, the first days of the new Biden administration brought multiple opportunities to begin addressing these threats. Already, President Biden has demonstrated a willingness to reengage in multilateral cooperation by rejoining the Paris Climate Agreement and the World Health Organization, and by renewing the New START nuclear treaty with Russia. This treaty is the cornerstone of mutually verified arms control between the world’s two largest nuclear powers.

The previous administration had indicated it would not renew the treaty, which would likely have resulted in a costly and dangerous arms race, diverting massive financial resources away from efforts to contain the pandemic and meet other human and environmental needs. The treaty does not reduce nuclear weapons, but it verifiably caps their number, and establishes a foundation on which to build further negotiations.

Also quickly following President Biden’s inauguration, on January 21, the UN Treaty on the Prohibition of Nuclear Weapons (TPNW) entered into force, making nuclear weapons illegal worldwide. The Holy See was among the first of fifty-four UN member states to ratify the treaty.

The world’s nine nuclear powers, including the United States, have thus far refused to sign the TPNW, claiming that it therefore has no claim upon them under international law. But, in a briefing paper on the TPNW and New START, the Noble Prize-winning International Campaign to Abolish Nuclear Weapons (ICAN), of which MOGC is a partner, argues, “With the TPNW in force, there is a new international standard. Russia, the United States and all nuclear-armed nations must take active steps to move towards compliance with this international treaty and join it.”

The next crucial step the Biden administration could take on nuclear policy would be to rejoin and salvage the Joint Comprehensive Plan of Action (JCPOA), also known as the Iran nuclear deal, which seeks to prevent nuclear weapons production in Iran. When the deal was brokered in 2015, the Catholic Church – including the Vatican, the U.S. Conference of Catholic Bishops, MOGC, and many other Catholic organizations – joined then-Vice President Biden in advocating for its adoption.

The Church condemned President Trump’s decision in 2018 to leave the agreement and unilaterally impose crippling sanctions on Iran. After remaining in full compliance with the Obama-era agreement for a year under U.S. sanctions were put in place, Iran has taken several limited steps to ramp up its nuclear program since 2019, in violation of the agreement, but in a clear effort to pressure the United States to rejoin. The Biden Administration has also expressed a desire to see the deal restored but insists that Iran must come back into full compliance with the original deal before sanctions are lifted, while Iran insists sanctions be lifted first.

While the U.S. Conference of Catholic Bishops has remained silent on the current stalemate, MOGC and 26 other national Catholic organizations have sent a letter to President Biden and Secretary of State Antony Blinken urging the United States to lift sanctions as a show of good faith that will help us progress toward renewing the deal. The letter outlines the moral and strategic arguments in favor of this crucial first step toward salvaging the Iran deal, which we believe will move the world toward nuclear non-proliferation and, ultimately, nuclear abolition.

Photo of 2015 signing of the JCPOA available on Flickr.