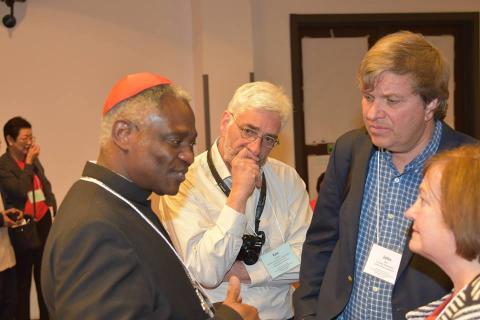 For many months Maryknoll Office for Global Concerns worked with other Catholic organizations and religious communities in planning a landmark Nonviolence and Just Peace Conference, hosted in Rome by the Pontifical Council for Justice and Peace and Pax Christi International April 11-13, 2016. The following article was published in the May–June 2016 issue of NewsNotes.

Over the course of three days in Rome more than 80 Catholic peace practitioners – religious and laity, bishops and theologians from around the world – listened intently to the lived experiences of those responding nonviolently to war and conflict in countries such as Iraq, Afghanistan, South Sudan, Palestine, Croatia, Burundi and Colombia. They reflected on the Gospel call to follow Jesus’ way of unconditional love, nonviolence, and peace.

A creative process that allowed each participant to share his or her experience shaped the two and half day gathering. In four sessions, a small group would sit in a circular “fishbowl” formation; each person would speak for a few minutes. Other participants would be welcome to approach the circle and have a turn to respond or address the given topic. After each large session, the participants broke into seven small groups to share more deeply. This led to deep, serious, and respectful conversations.

As you can imagine, with 80 laity, religious, bishops and priests from over 35 countries, there was a rich diversity of experience in the practice of nonviolence.  We heard moving testimonies of hope and struggle from a sister in Iraq, a bishop in South Sudan, a priest from Jeju Island, Korea, and a laywoman who is a leader of Kairos Palestine, to name a few.   Ken Butigan, one of our facilitators, remarked that to call this a nonviolent “conference” is a misnomer – it is a dialogue, a process or actually just the beginning of a process that we hope will sweep through the entire Church.

One session, “Experiences of Nonviolence” explored nonviolence as a spiritual commitment of faith and a practical strategy in violent situations and different cultural contexts. The lead reflectors were Katarina Kruhonja of Croatia, Bishop Paride Taban of South Sudan, Mairead Maguire of Ireland and Pietro Ameglio of Mexico.   After powerful testimonies by these four, Maria Stephan of the US stepped into the inner circle and shared her research on the success of nonviolent struggles compared to violent tactics in ending oppressive regimes.

Participants affirmed the final outcome document, “An appeal to the Catholic Church to recommit to the centrality of Gospel nonviolence,” during the final afternoon together. The full statement is on page 5 and 6 of this issue of NewsNotes and online at http://bit.ly/PaxChristiGospelNonviolence. A copy of the statement was given to the Pontifical Council for Justice and Peace with the understanding that Cardinal Turkson will give it to Pope Francis.

Conference participants are committed to keeping alive a conversation on the many complex issues related to the meeting and statement, and will look for ways to support the Church’s work for nonviolence – to “integrate Gospel nonviolence explicitly into the life, including the sacramental life, and work of the Church through dioceses, parishes, agencies, schools, universities, seminaries, religious orders, voluntary associations, and others.”

This is just the beginning of an ongoing effort to spark a new dialogue on nonviolence in the Catholic Church with the aim of transforming a world engulfed by war and challenging the mindset that sees violence as justified or even redemptive.  The Maryknoll Office for Global Concerns, along with Pax Christi International and the other organizers of the conference, is committed to engaging with you and many others who could not be at this conference, to join in this dialogue for peace.