Nepal: One year after the earthquake 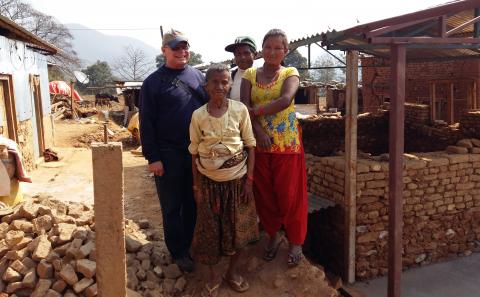 The following article,published in the March-April 2016 issue of NewsNotes, is an update on the work of Maryknoll Father Joe Thaler in Nepal, one year after a massive earthquake struck the country.

On April 25, 2015, Nepal was struck by a devastating earthquake. The quake and subsequent avalanches and aftershocks killed more than 9,000 people and injured more than 23,000. Hundreds of thousands of people were made homeless with entire villages flattened across the country.

Maryknoll Father Joe Thaler has served in Nepal for 30 years and has come to know generations of families who have participated in his many different projects that provide income, health care and nutritional staples. Father Joe was out of the country on the day of the earthquake (April 25) but he returned home to Kathmandu very soon after. Over the past year, he has been helping the people of Nepal recover from this terrible disaster.

While all the projects overseen by Father Joe were destroyed during the earthquakes, plans were quickly put into action to revitalize some of them. Father Joe continues, with his staff, to help rebuild the lives of the people in many villages.

Recently, Father Joe wrote about the people  who live in the village of Bhimtar. Father Joe shared numerous stories of people who have come together to help one another in different ways, from the cleanup after the earthquake to the rebuilding of new homes. Thanks to generous donations, Maryknoll has been able to support the purchase of building materials for the construction of new homes in Bhimtar. One example is the home of the Majhi family. With support from Maryknoll, the Majhi family was able to purchase bricks for building a new home. Four neighbors helped to clean away the previous house destroyed by the earthquake and build a new house. The Majhi family plans to help their neighbors do the same. Father Joe wishes to extend their thanks to everyone who supports the work of Maryknoll. §

Faith in action: To learn how you can support the work of Father Thaler and the Maryknoll Fathers and Brothers in Nepal, visit http://bit.ly/MaryknollNepal.