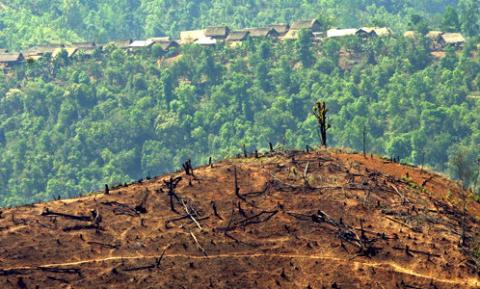 The following article was written by Chris Smith, a Maryknoll Affiliate and volunteer with the Maryknoll Office for Global Concerns and was published in the September-October 2015 NewsNotes.

The problem of illegal logging in forests in the developing world represents a microcosm of the phenomenon of exploitation of natural resources by corrupt governing elites that wreak environmental damage while simultaneously diverting government revenue away from public goods. The story of illegal logging in Myanmar illustrates the devastating consequences of this practice.

Myanmar (formerly known as Burma) was a British colony when it won independence in 1948, but was plagued by instability and civil war as the new government contended with communist and ethnic rebels. The military took power through a coup in 1962 and suspended the Constitution. It has continued to rule in Myanmar despite a major uprising in 1988, and the development of the opposition party National League of Democracy, which won a landslide victory in 1990 elections but was prevented from taking power by the military junta. Western countries implemented economic sanctions in response to the government’s brutal suppression of human rights, but enough progress towards new elections and other reforms was made so that most of the sanctions were lifted in anticipation of a general election in November 2015.

Myanmar’s timber is no longer under sanctions restrictions, but illegal logging of valuable wood is feeding neighboring China’s growing demand for timber products. China’s timber needs depend on imports, which supplies 30 percent of the total market. Since 2006, China has been the world’s largest importer of timber, and is the largest exporter of furniture and other processed wood products. The Myanmar-Chinese border had provided a reliable pathway for smuggling networks to transport jade, timber, rice, weapons and other commodities.

While on paper the government of Myanmar prohibits illegal logging into China, the reality on the ground tells a different story. It is estimated that 48 percent of exported timber (between 2000 and 2013) from Myanmar was cut illegally (without government permission), and 72 percent of the total timber trade – worth $5.7 billion – was smuggled across Myanmar’s border through illicit export deals, according to a report of the Environmental Investigation Agency (EIA), an international organization that promotes transparent and sustainable global trade and supply chains. The report faults “fundamental governance failures in Myanmar’s timber sector,” and concludes that “wide-ranging reform is required to sustain forest resources and enable access to the increasing number of high-value markets sensitive to legality issues, including the EU, U.S., Australia and others.” [Data Corruption: Exposing the true scale of logging in Myanmar, March 2014]

China could play a much larger role in deterring illegal logging, and the State Forestry Administration of China (SFA) in 2014 sought comments from NGOs on the Chinese government’s proposed policies to address the issue. A principal flaw of the timber guidelines according to EIA is that they are voluntary measures based on self-regulation, rather than mandatory regulations enforced by the Chinese government. Moreover, the guidelines are limited to overseas Chinese timber operations; domestic Chinese importers of timber are not covered. China has sought to address illegal timber imports through voluntary guidelines, the previous version having been released in 2009. Unfortunately, little progress was made in curbing the illegal timber trade and SFA’s latest approach offers little hope for concrete improvement.

On the Myanmar side of the border, certain structural issues have served to impede the development of effective mechanisms to staunch the flow of illegal timber into China. One is the ongoing ethnic conflict in northern Myanmar involving the Kachin Independence Army (KIA). The KIA’s need for resources to maintain their insurgency provides a motive to fuel their participation in illegal logging and facilitate the movement of timber across the Chinese border. The Myanmar Timber Enterprise is supposed to license all wood exports through Rangoon Port, but EIA found that 72 percent of all exported timber left without their approval. Myanmar’s army, known as the Tatmadaw, has maintained that its operations in the northern part of the country against the KIA is designed to disrupt their illegal logging activities, and the Myanmar government initiated a log export ban in April 2014. But recent evidence indicates that these measures are simply inadequate in making a significant mark on reducing smuggling of illegal timber into China.

What can be done to deter and punish those parties who continue to facilitate the export of illegal timber into China (and elsewhere)? The Environmental Investigation Agency recommends a multi-pronged approach:

The Convention on Internal Trade in Endangered Species (CITES) can provide a mechanism for protecting high-value luxury timber that grows in Myanmar’s forests and serves to meet the demand from China’s wood processing industry. Other countries who participate in CITES can assist Myanmar in upholding its commitment to the Convention.

Efforts to change and reform Myanmar’s illegal logging market will be challenged by a government operated by a small elite steeped in a long history of corruption and ethnic conflicts that have established narrow separatist armies focused on maintaining their viability and power. The economic resources gained from exporting illegal timber represent lucrative options for both parties. Although these dynamics are hardly unique in developing countries with valuable natural resources, a concerted effort by western countries, international actors and NGOs can help lay the groundwork for sustainable solutions that promote environmental protection for Mynamar’s forests and enhance sustainable economic development that benefits the entire population of the country.

"Deforestation in Burma" by jidanchaomian -  Licensed under CC BY-SA 2.0 via Commons