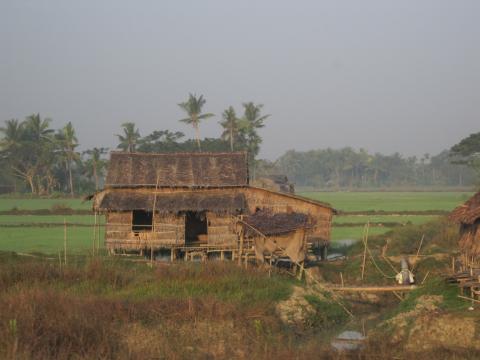 "We are preparing for the dawn of a new era of freedom, democracy, justice, peace and hope … a new era of fraternity," wrote Archbishop Charles Bo of Yangon as 2014 began. "There are many reasons for hope … We are just at the very beginning of a new chapter" in our country’s history, he said.

Burma, also known as Myanmar, has only recently emerged from nearly 50 years of strict military dictatorship, with a history of ethnic strife, corruption and human rights violations. In 2011 the military junta was ostensibly dissolved and reforms begun.

"In the past two years the restrictions on freedom of expression have been relaxed, there is more space for civil society, the media and political actors, there have been preliminary steps towards peace in the ethnic states, and many political prisoners have been released," the Archbishop commented.

Notable among those released was political activist and Nobel Peace Prize laureate Aung San Suu Kyi, who was elected to parliament in 2012. That same year, the U.S. and other nations lifted most political and economic sanctions, and a U.S. ambassador was reinstated. There is a sense that the country is emerging from its long repressive isolation. Elections are scheduled for 2015, and Aung San Suu Kyi and others are calling for a reform of the Constitution, which enshrines near complete power with the military and currently bars her from running for president.

Church leaders, notably Archbishop Bo, now speak openly and forcefully to insist that inter-religious understanding and respect for human rights are essential to achieve unity and peace in this union of 134 different ethnic groups with a majority Buddhist population.

However, scores of political prisoners remain in custody and military leaders – sometimes doffing their uniforms in favor of street clothes to enhance the image of a "civilian" government – seem loathe to relinquish power. This control has enabled them to enrich themselves by confiscating protestors’ homes and land, and maintaining a state monopoly on resources such as teak and minerals, while playing off tensions between ethnic minorities to their own advantage. Worse, critics say, government-sanctioned violence against the Rohingya, a Muslim ethnic group, has increased dramatically since 2012.

Western Myanmar’s Rakhine state has experienced several waves of violence between Rohingya Muslims and Rakhine Buddhists in the past two years. The Rakhine, much like the government, consider Rohingya to be illegal Bengali immigrants from nearby Bangladesh if they cannot trace their parentage from Rakhine who were registered by the government in 1982, and deny them citizenship and corresponding rights to healthcare and education. In Sittwe, the capital of Rakhine state, nearly 140,000 Rohingya have been forced into refugee camps or remain in Muslim-only ghettos barricaded with barbed wire and armed guards.

On January 13 at least 40 Rohingya men, women and children in the village of Du Chee Yar Tan in Rakhine State were killed by a Buddhist mob, leaving some of the victims’ decapitated heads in the village water tank. In a special report on Jan. 23, UN human rights chief Navi Pillay condemned the massacre and urged the government to act quickly. "I deplore the loss of life in Du Chee Yar Tan and call on the authorities to carry out a full, prompt and impartial investigation and ensure that victims and their families receive justice," Pillay said in a statement.

After Doctors Without Borders, the Rohingya’s primary healthcare provider, treated survivors of the attack, the government ordered it to stop its medical services to the Rohingya, alleging favoritism. The government did not renew its Memorandum of Understand with Doctors Without Borders in January, and on February 27 ordered the group to stop its services to people living with HIV, AIDS and malaria in Rakhine, Shan and Kachin states and Yangon Region, where it had been serving 17,000 HIV patients.

The government seems disinclined to protect the human rights of ethnic minorities such as the Rohingya, since its policies promote the dominance of the Burmese ethnic group and the Buddhist majority. Indeed, documents leaked to Fortify Rights, a human rights group focused on the Rohingya, show evidence that the persecution of Rohingya is official state policy.

In a report published February 23, Fortify Rights says documents dating back over the past 24 years show systematic control of the ethnic group’s movement and rights, including limiting the number of children they may have, where they can live or travel, and preventing their access to healthcare and education. An estimated 1.3 million Rohingya are denied citizenship under national law.

"These policies are being supported by the highest levels of government, the same officials now being courted by Western governments," said Matthew Smith, executive director of Fortify Rights and a co-author of the report. "These officials don’t see the need to end abuses of the Rohingya as part of wider reforms… It’s plain to see authorities have made life so intolerable for Rohingya that in many cases they have no option but to flee to another country," Smith told the Union of Catholic Asian News. As a result, nearly 80,000 Rohingya have paid smugglers to take them on perilous sea journeys to Thailand, Malaysia or Bangladesh, some of them drowning in the attempt.

Archbishop Bo has condemned "the tragedy of an entire people, [the Rohingyas], treated as if they were not human…. It breaks my heart to see the rising hatred and religious intolerance in Myanmar, and even more so to see waves of horrific violence and destruction. I am therefore writing this personal appeal to my Buddhist and Muslim brothers and sisters, to call for voices of peace and harmony to speak out loudly, to urge the government to take urgent action to protect vulnerable communities and stop those who incite or perpetrate hatred and violence, and to urge all communities to unite to build a nation in which people of all religions and ethnicities can live with respect for each other, in peace and dignity."

In a powerful homily December 8, Archbishop Bo compared the nine journeys of Mary to the suffering of Myanmar: "We are a nation on a search. Thousands who disappeared. Thousands who were taken away after the midnight knock at the door. Over 150,000 lives were lost during Cyclone Nargis. Those who died in [the 1988] revolution, those who disappeared. Mostly women, mothers and sisters are searching for their husbands, brothers and sons. A nation in search of itself. The 2007 saffron revolution took hundreds of youth to unknown death camps. Many monks too perished in that secret war…

"After decades of oppression and injustice and isolation, at last we have an opportunity to build a nation of freedom, open to the world. A nation in which we can be ourselves at last, prosper and fulfil the full potential of our Golden Land… For the first time in more than 50 years, there are reasons to be hopeful for Myanmar … [but] this is just the very beginning of the beginning."