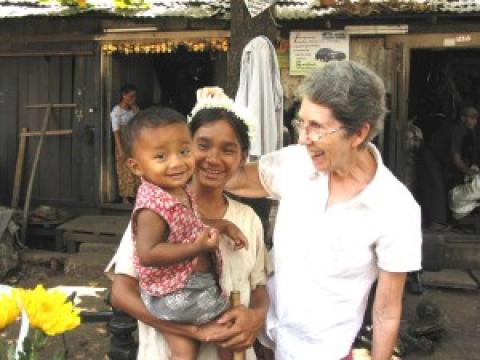 On February 6, Cardinal Charles Maung Bo of Yangon issued an appeal to the government of Myanmar to end military offensives and allow unhindered access to war-torn parts of Myanmar for international humanitarian aid agencies, media and human rights monitors. Maryknoll Sister Mary Grenough, who recently returned to New York after many years on mission in Myanmar, contributed to this article, which was published in the March-April 2017 issue of NewsNotes.

In a statement entitled “Heal – not wound,” Cardinal Bo of Yangoon, Myanmar, raises concerns about the ongoing fighting in Kachin and Shan states and offers prayers and solidarity with the people of Myanmar who live in conflict zones. Cardinal Bo names the states of Kachin, Shan, and in particular, the state of Rakhine, which is the subject of a 43-page report issued on February 3 by the UN’s Office of the High Commissioner for Human Rights.

The UN report concludes that the abuses suffered by Rohingya Muslims by soldiers and police during a security crackdown in early October indicated “the very likely commission of crimes against humanity.”

“People of Myanmar are deeply saddened by what looks like a relapse into darker days.” Cardinal Bo says. “Myanmar needs the world’s attention to strengthen its fragile journey of democracy.”

“Let the UN’s devastating report serve as a wake-up call for us all,” Cardinal Bo says. “Let us work together to end violence and terror in our country, and to build a Myanmar where every man, woman and child of every race and religion born on Myanmar soil is recognized both as our fellow citizen and as our brother and sister in humanity.”

One week after Cardinal Bo issued this statement, Monsignor Maurice Nyunt Wai, executive secretary of the Myanmar Catholic Bishops Conference, told ucanews.com, "The church will participate in the peace process not only with prayers but with a peace conference as the Aung San Suu Kyi-led government prioritizes peace and she is pushing for it."

According to Father Wai, Cardinal Bo will invite representatives of all of Myanmar's factions to the peace conference in Yangon in April 2017.

The non-Burmese ethnic peoples – about 135 distinct ethnicities who represent about 40 percent of the population –have never received their rightful share of government services (education, infrastructure, representation in national government). The majority of them reside in the mineral-rich mountainous and border areas which are exploited by the military and other high ranking government officials.

To protect their lands and their lives, some of the larger groups, especially the Kachin and Shan, have developed their own armies.  The resulting civil war has continued on and off since 1947. The mining of mineral resources of jade, rubies, and teakwood have enriched military and government officials and destroyed forests, polluted rivers, and literally turned mountains into wastelands.

The majority Burman ethnic group makes up about two-thirds of the population and controls the military and the government. The minority ethnic nationalities, making up the remaining one-third, are often forcibly removed from their homes by the government-backed military in land grabs for development projects and resource exploitation. As a result, millions of people from minority groups have become internally displaced or refugees in neighboring countries. Currently, more than 200,000 people live in refugee camps in Rahkine with inadequate food, shelter, education, and health services.

Muslims, who constitute about 4 percent of the population, have increasingly been targets of mob violence and displacement over the past three years. The most serious attacks have been against the Rohingya – a minority group that the government declared to be non-citizens due to their historical origins in Bangladesh and illegal entry into Myanmar more than 30 years ago. Nobel Peace Prize laureate and current President Aung San Suu Kyi failed to act when the abuses and killing of Rohingya Muslims came to light in 2015. Pressure from international human rights organizations finally moved her to ask the United Nations to investigate in 2016.

The UN report released on February 3 cites evidence of the killing of more than a hundred Rohingya in a crackdown last October, as well as mass killings, gang rapes, and apartheid-like living conditions for the estimated 1.1 million Rohingya Muslims in Rahkine State. Those who have been able to escape to Malaysia, Thailand, Indonesia and Bangladesh, go as stateless, undocumented persons.