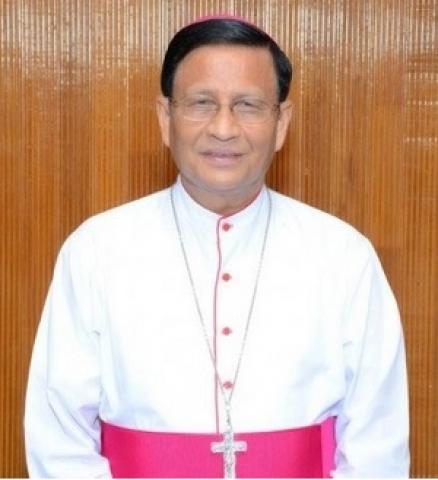 The following interview with Cardinal Charles Maung Bo, the leader of the Catholic Church in Myanmar, was published by the Union of Catholic Asian News (UCAN) on December 2 and was reprinted in the  January-February 2016 issue of NewsNotes.

Myanmar’s Cardinal Charles Maung Bo of Yangon has raised his concern on the smooth transition of power from the ruling military-backed government to Aung San Suu Kyi’s National League for Democracy after the party’s landslide victory in the November 8 polls.

"I hope that the country will move forward in a transition to democracy if Suu Kyi reconciles with all stake holders — the ruling-USDP members, government and the military," Cardinal Bo told ucanews.com in an exclusive interview at his Yangon residence.

Despite promises of a clean handover by the military, Cardinal Bo said that it was still difficult to determine the motives of the military who ignored election results in 1990 that the NLD won, plunging the country into two decades of darkness.

"The election was a very peaceful one but my main concern is on the motives of the military and how they are thinking or planning the power transfer, despite the military and the government promising a smooth transfer power," said Cardinal Bo, 67.

The cardinal, who was named the country’s first cardinal by Pope Francis in February, regularly speaks out on human and religious rights and political issues.

Ahead of elections, Cardinal Bo detailed the attributes voters should seek in choosing candidates in a 10-point guide. These included an ability to work with "different ethnic groups and religions" in the Buddhist-majority country.

"President Thein Sein and Suu Kyi have openly discussed the smooth transfer of power to a new government and how to approach the transition," a statement from the presidential office on December 2 read.

The NLD and military are yet to release statements about meetings.

The NLD won 390 seats in Myanmar's parliament November 8, surpassing the 329-seat threshold needed to gain a 51 percent majority in parliament — ensuring the party will be unimpeded in choosing Myanmar's next president in a parliamentary committee vote scheduled for February.

At least 20 Christian candidates from the NLD were elected to parliament out of some 1,000 Christian politicians who sought seats. However, many smaller parties from seven ethnic-based parties did not fare well, as electors opted to vote for the NLD over local groups.

Gint Kam Lian, a Christian politician from the Zomi Congress for Democracy party in Christian majority Chin state, who won a federal upper house seat, said the talks were a positive move toward national reconciliation.

"We hope that Suu Kyi and the military’s chief discussed the possibility of a constitutional amendment on a clause that bars her from becoming the president," he added.

"The people have a strong desire for her becoming president and an agreement on amending it would help the country’s peace process," said Gint Kam Lian.