Myanmar: “Peace is the only way” 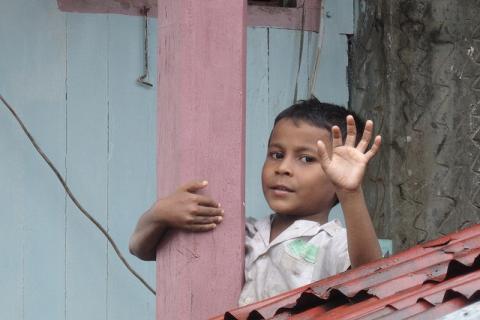 The people of Myanmar have seen hopes for peace intensified in recent months, only to have them threatened by further human rights abuses and warfare.  The following article was published in the November-December 2016 issue of NewsNotes.

"Peace is the only way [for] this nation whose date with destiny has arrived. The nation is in the throes of a new birth," said Cardinal Charles Maung Bo of Yangon, as Aung San Suu Kyi's democratically elected government held the 21st Century Panglong Peace Conference in the first week of September, with nearly 1,600 participants seeking to end decades of ethnic civil wars.

Suu Kyi's father, General Aung San reached an agreement giving autonomy to the Kachin, Shan and Chin ethnic groups in 1947 in the first Panglong Peace Conference, but the deal was never fulfilled. Aung San was assassinated shortly after the conference, and the ethnic groups took up arms against the central government.

Speaking of the importance of Aung San Suu Kyi’s peace initiative, the 67-year-old Cardinal Bo said that this is an historic moment, an opportunity of immense significance for the people of Myanmar — millions of whom are refugees, migrants and internally displaced people (IDP) because of the civil war.

The all-inclusive Panglong agreement signed in 1947 must "serve as the foundation to build a great peace and this conference is a first step in the long pilgrimage of hope," he said.

Since the 21st Century Panglong Conference in September, however, the military has stepped up air strikes in Kachin State and begun to attack positions of the Kachin Independence Army (KIA).  The fighting between the KIA and the Myanmar military in Kachin and Shan states is considered the most severe of the country's four ongoing conflicts.

The KIA took up arms against the military in 2011 after a 17-year-long ceasefire in the Christian-majority region. Since then, more than 120,000 people have been forced into 167 IDP camps.

"Recent events have raised serious concerns that the Panglong conference might be a false dawn," Cardinal Bo said in a statement released on October 17.

"War for peace? Just war? In Kachin State? War can never be just," he said.

Meanwhile, in western Rakhine state, following an October 9 attack against border police posts,  security operations of the military have been accused of numerous extrajudicial killings of civilians, including children, and the displacement of upwards of 15,000 people, mostly Rohingya Muslims. Yanghee Lee, the U.N. Special Rapporteur, expressed concerns about the human rights situation in Myanmar in a statement on October 24.

Aung San Suu Kyi has moved to address the plight of stateless Rohingya Muslims in Rakhine state by appointing former UN Secretary-General Kofi Annan to head an advisory commission to look into the problem. This news was welcomed by activists and rights groups, but vehemently opposed by some hard-line Buddhist political parties. The commission’s mandate is to seek national reconciliation, human rights and humanitarian assistance. Over 120,000 Rohingya have been confined to desperate camps in apartheid-like conditions where they are denied citizenship, freedom of movement, health care and education.

A movement for peace may be growing across Myanmar, however, with demonstrations being held in several cities and in Chin and northern Shan states.

John Zaw, of Catholic News Asia (http://www.ucanews.com/) reports that at least 30,000 people from different faiths and ethnic groups were estimated to have taken part in a demonstration in Myanmar's northern Kachin State on October 22 where they demanded an end to military operations in the region.

Protestors, including Catholic priests and nuns, held placards that read, "stop civil war" and "may there be peace in Myanmar" on the streets in Myitkyina, the capital city of Kachin State.

The fighting between the KIA and the military in Kachin and Shan states is considered the most severe of the country's four ongoing conflicts.

"Our people need to be involved in the peace process, not only with our prayers but also taking part in demonstrations," said Bishop Daw Tang, who encouraged priests, nuns and laypeople to join the protest.

He told Catholic News Asia that "people have repeatedly called for an end to civil war."

Photo: A boy in Sittwe, Rakhine State, Myanmar on September 7. Photo by Flickr user DYKT Mohigan and licensed under CC BY 2.0.