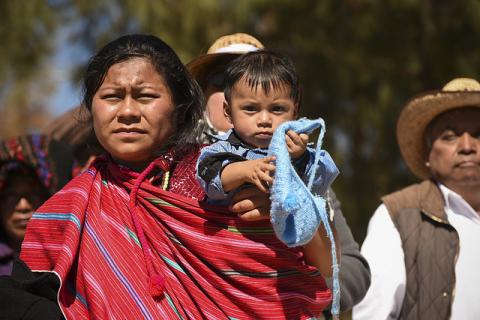 MOGC’s Sustainable Pathways to Peace and Security intern Nicholas Alexandrou contributed to this article, which was published in the March-April 2016 issue of NewsNotes.

In February, Pope Francis completed a six-day pastoral visit to Mexico. With five key moments, the pope addressed the full spectrum of Mexican society and delivered a clear moral message about corruption and poverty, violence, and migration that transcends national boundaries and speaks to the whole world.
First, he admonished both the government and the Catholic clergy on issues of corruption and systemic poverty. President Enrique Pena Nieto, who remains deeply unpopular over his mishandling of the drug violence and failures in tackling corruption, extended an official state welcome to Pope Francis at the National Palace. Francis spoke candidly to government officials there, criticized them for serving their own needs over the needs of the majority of Mexican people. “Experience teaches us that each time we seek the path of privileges or benefits for a few to the detriment of the good of all, sooner or later the life of society becomes a fertile soil for corruption, drug trade, exclusion of different cultures, violence and also human trafficking, kidnapping and death, bringing suffering and slowing down development,” the pope said.

Francis was equally critical when he spoke to Catholic clergy gathered at the National Cathedral. "Do not allow yourselves to be corrupted by trivial materialism or by the seductive illusion of underhanded agreements,” he said. “Do not place your faith in the chariots and horses of today's Pharaohs, for our strength is in the pillar of fire which divides the sea in two, without much fanfare."

Second, he addressed two forms of violence: the long-standing systemic violence in the Church toward indigenous communities, and the violence by organized crime and drug trafficking, especially toward the youth. In Chiapas, one of Mexico’s poorest and predominately indigenous states, Francis celebrated Mass with tens of thousands of Mexico’s indigenous people. He implemented his new decree authorizing the use of indigenous languages in liturgy by including readings, prayers, and hymns in the three main indigenous languages of Chiapas: Tzeltal, Tzotzil and Chol, which are spoken by just over a million people. He repeated his apology first offered in Bolivia last year: "Some have considered your values, culture and traditions to be inferior,” he said. “Others, intoxicated by power, money and market trends, have stolen your lands or contaminated them. Forgive me. Today's world, ravaged as it is by a throwaway culture, needs you!”

In Michoacán, the most violent state in Mexico, Francis addressed the violence by organized crime and the drug trade. He spoke directly to young people, imploring them to resist the allure of easy money by joining the drug trade. He continued with remarks addressed to Mexican authorizes, criticizing them for not providing young people with employment or basic services, pushing them toward work in the drug trade. "It is hard to feel the wealth of a nation when there are no opportunities for dignified work, no possibilities for study or advancement, when you feel your rights are being trampled on, which then leads you to extreme situations," he said.

Third, he expressed solidarity with migrants by celebrating Mass alongside the border fence that divides Juarez, Mexico, and El Paso, Texas. In his homily, he acknowledged the thousands of migrants who have died trying to reach the United States, and he called on world leaders to care for the more than 60 million migrants around the world. He said they should measure this tragic global phenomenon not by numbers and statistics, but by names and stories and families, and that those running from danger should not be criminalized. “They are ‘cannon fodder,’ persecuted and threatened when they try to flee the spiral of violence and the hell of drugs,” he said. “Let us together ask our God for the gift of conversion, the gift of tears, let us ask him to give us open hearts like the Ninevites, open to his call heard in the suffering faces of countless men and women. No more death! No more exploitation! There is still time to change, there is still a way out and a chance, time to implore the mercy of God.”