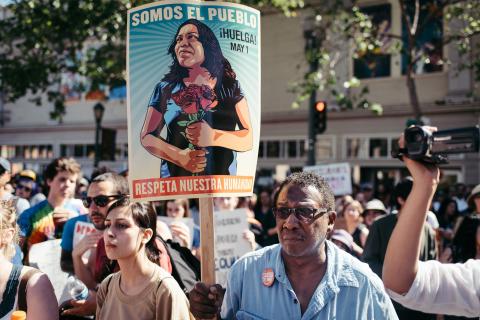 The following statement was made by the Maryknoll Office for Global Concerns on January 8, 2018.

The Maryknoll Office for Global Concerns strongly objects to the announcement made by the Department of Homeland Security on January 8, 2018 that more than 200,000 people from El Salvador who have been living and working legally in the United States with Temporary Protected Status must leave within the next 18 months or face deportation.

“When the United States last extended Temporary Protected Status (TPS) for Salvadorians in 2016, the government named several compelling factors, including drought, poverty, and widespread gang violence. Those reasons have not changed,” said Gerry Lee, director of the Maryknoll Office for Global Concerns.

This is why the Maryknoll Office for Global Concerns and over 400 faith leaders delivered a letter to Secretary of Homeland Security Kirstjen Nielsen on January 4, urging the agency to extend Temporary Protected Status for Salvadoran TPS holders for at least another 18 months. The letter, organized by the Catholic Legal Immigration Network, Inc. (CLINIC) and Church World Service, states:

“Subsequent administrations extended TPS for El Salvador due to conditions that prevented Salvadoran TPS holders’ safe return. Forced gang conscription, human trafficking, and sexual exploitation are among the many human rights violations to which children, families, women and men are subjected in El Salvador. In addition, El Salvador has the highest murder rate in the world, and a staggering 6,657 homicides were recorded in the country in 2015, a 70 percent increase from the year prior.”

To read the full text of the letter, please visit http://bit.ly/CLINICTPSELSAL

Having lived and worked with families in extreme poverty in El Salvador for many years, Maryknoll Sisters, Fathers and Brothers, and Lay Missioners have acquired a deep understanding of the dire social, economic, and environmental conditions that TPS recipients would face if they were deported to El Salvador, as well as intimate witness to the fragility and insecurity of living in the shadows without documents in the United States.

“Deporting TPS recipients to El Salvador would subject them to the same forces of poverty, violence, and instability they originally fled and from which tens of thousands more still flee,” Lee said.

For millions in Central America, daily life has become a nightmare to escape. In Honduras, El Salvador, and Guatemala, the countries of the so-called Northern Triangle, gang wars and what some have called “iron-fisted” state countermeasures have normalized violence to the extent that UN officials view the region in the same terms and with the same urgency as violent crises in Africa and the Middle East.  At least 50,000 people have been murdered there in the past three years.

The bloodshed in the Northern Triangle has forced millions to flee, at an estimated rate of more than 500,000 a year. Deepening drastically since 2014, the crisis has bled across the border into the United States with the arrival of hundreds of thousands of migrants seeking refuge, the vast majority of them unaccompanied children and families. It’s in this context of crisis that the Trump administration is rescinding protections to nearly 250,000 Salvadorians, who are believed to have nearly the same number of U.S. citizen children.

Larry Parr, a Maryknoll Lay Missioner in El Salvador, described in an article in Maryknoll Magazine the fear and pain that pervades Salvadorian communities preyed upon by powerful gangs and patrolled by intimidating police forces, where immediate survival compels youth to face grim choices between lives of drugs and guns – or escape. “It is common to see police or military patrols walking the dirt roads with their weapons in hand ‘looking for gang members,’” the Missioner said. “In El Salvador, the answer to sin and injustice is not the violent tactics of the military nor the dehumanizing of the gang members,” Parr said in a Scripture reflection for September 10. “We need to see everyone as a child of God. Only then can we work together to denounce violence and injustice and create a better world.”

Just one year ago, on the Feast of the Epiphany, another Maryknoll Lay Missioner in El Salvador, Rick Dixon,  wrote a Scripture reflection on the trauma that forced migration – to escape poverty and violence – has had on families in El Salvador. “What gives me the right to live a better life than this fragile waiting child?” Dixon asked, when he found himself face to face with a heartbroken child, grieving for her father who has left home on the dangerous journey North in search of work.

Maryknoll Missioners working in migrant shelters along the U.S.-Mexico border in El Paso, Texas, also hear daily stories of desperation from El Salvador and other Central American countries. Poverty, starvation, extortion, sexual assault, gang violence, and political oppression are among the conditions cited by migrants as triggers to leave. In one such encounter in Nogales, Sonora, a man traveling north with his son from Central America merely pointed south and told a Maryknoll staff member “There is no life there anymore.”

“The Trump administration is taking action against a vulnerable people with little regard for the facts on the ground,” said Lee. “TPS recipients from El Salvador now find themselves in an impossible situation, forced to either return to a country ill-prepared to receive them or live without legal status, in the shadows in the United States, vulnerable to trafficking and other forms of exploitation.”

TPS recipients from El Salvador are integral community members in the United States. High percentages have lived in the U.S. for 20 years or more, participate in the labor force at a much higher rate than the total U.S. population, speak English well, arrived as children, and have children who were born here and thus are U.S. citizens. The economic contributions to the U.S. economy made by Salvadoran TPS holders are significant, especially in construction, child care, and health care industries, as is the role of remittances in helping to stabilize the Salvadoran economy and promote regional security.

“TPS holders from El Salvador, long-recognized by the United States as in need of protection, should not be torn from jobs, schools, and homes where they are safe, where they are able to maintain strong family ties, and where they are making valuable contributions to society. TPS recipients need to have their legal status extended.” Lee said.

Photo: "We are the people" and "Respect our humanity" poster held by a demonstrator at May Day rally in Oakland, California, May 1, 2017, by Flickr/Annette Bernhardt.