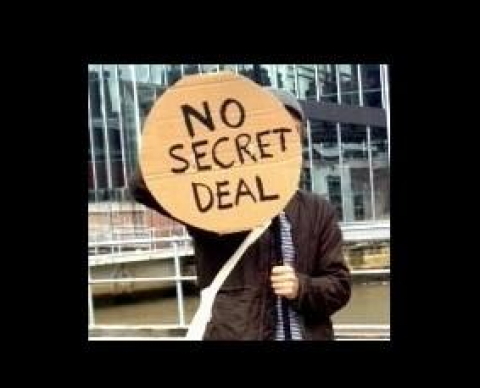 WASHINGTON, DC, April 16 — A number of faith leaders representing religious communions, denominations, and organizations across the country spoke out today to voice their concern about the newly released Trade Promotion Authority bill, or Fast Track, which would give the president unilateral power to sign the secretive Trans-Pacific Partnership free trade agreement without a chance for debate in Congress. This legislation is deeply troubling to people of faith, who witness the impact of past free trade negotiations on God’s people and Creation in the United States and around the world.

“Any ‘Fast Track’ mechanism designed to advance the Trans-Pacific Partnership would only further silence the voices of those who have been harmed by past trade agreements. The vulnerable and marginalized are our priority as a church, and we cannot serve them when the ability for public debate is compromised. Without congressional oversight where it is due, the Trans-Pacific Partnership will surely follow in the destructive footsteps of NAFTA and CAFTA,” said Rev. J. Herbert Nelson, Director of Presbyterian Church (USA) Office of Public Witness.

Sr. Simone Campbell, SSS, Executive Director of NETWORK, A National Catholic Social Justice Lobby, said, “Fast Track is a broken and undemocratic process that closes off debate and silences the voices of people not at the negotiating table. We know from past agreements that the adverse impacts of such agreements are not considered by those who seek to benefit greatly from their provisions. To compound that problem, Fast Track silences the voices that most need to be heard. Trade agreements need a full discussion. They must reflect our values and support the common good.”

Sr. Patricia McDermott, President of the Sisters of Mercy of the Americas, said, “Opposition to the Trade Promotion Authority and the Trans-Pacific Partnership is an urgent moral issue, with grave consequences. With our commitment to persons who are poor, especially women and girls, the Sisters of Mercy are greatly concerned about what could become a globalized race to the bottom for cheap production, with countries like Vietnam and Brunei becoming the newly exploited labor markets.”

“Trade agreements impact many aspects of our lives, the lives of our neighbors around the world, and the environment,” said Rev. M. Linda Jaramillo, Executive Minister, United Church of Christ Justice and Witness Ministries. “These potentially harmful agreements need very careful and thorough scrutiny by Congress. We urge policymakers to defeat Fast Track legislation which would shorten and restrict the usual oversight process.”

“Catholic social teaching calls us to ensure community participation in the democratic process. We are disappointed that once again Congress is proposing a flawed form of trade authority that allows the president to sign an agreement that has not been fully debated. Also, the proposed trade agreement fails to take into account voices and needs of people living on the margins,” said Gerry Lee, Director of the Maryknoll Office for Global Concerns.

Diane Randall, Executive Secretary of the Friends Committee on National Legislation, said, “We support trade policies that are beneficial to all countries and peoples, especially the poorest among us. The Friends Committee on National Legislation opposes fast track trade promotion authority for the current trade agreements being negotiated because Fast Track is a fundamentally undemocratic process that will not care for creation or vulnerable communities.”

“Fast Track curtails the voice of poor, whose needs should come before profit. We urge Congress to reject this legislation, which is unjust and undemocratic, and continue to stand in solidarity with the marginalized communities that have been negatively impacted by free trade agreements in countries where Columban missionaries serve. As Pope Francis has taught us, the economy should serve the people, not the other way around,” said Scott Wright, Director of the Columban Center for Advocacy and Outreach.”

The Interfaith Working Group on Trade and Investment includes representatives of a broad spectrum and religious institutions in the United States. We advocate for just trade and investment policies that prioritize God’s people and Creation.