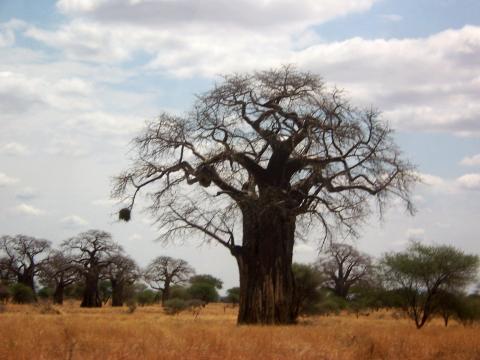 The following was published in the November-December 2015 NewsNotes and is an excerpt from an article written by Alex Muyebe, SJ, director of the Jesuit Centre for Ecology and Development, Lilongwe, Malawi, and Peter Henriot, SJ, who works with Loyola Jesuit Secondary School, Kasungu, Malawi. An unabridged version of this article, entitled “What does the environment encyclical mean for Malawi?” appears in the August 28 issue of the British Catholic magazine The Tablet.

“It was a very tall and very full tree, branches thick and thin – ideal for cutting down to cook many meals and to warm many huts.  But over the years, no one has touched it, despite trees all around it having been cut down and the landscape left quite barren.

“Why has this tree been preserved? A local Malawian villager told us very directly and simply: ‘The spirits protect the tree, to help us draw water locally.’ A closer look at the roots of the tree reveals a small spring that provides good fresh water. But there’s more to the tree’s survival than this. The people of this village and other villages in the area have a very strong traditional belief in a spirit-filled world. And it is believed that this particular tree shelters spirits which provide water for all the communities around.

“The belief in a spirit-filled world that has been created for the delight and the good of human beings is of course a central theme of Laudato Si’, Pope Francis’s dramatic encyclical on the environment. The traditional African recognition of the sacredness of nature is echoed in its opening lines: ‘In the words of this beautiful canticle, Saint Francis of Assisi reminds us that our common home is like a sister with whom we share our life and a beautiful mother who opens her arms to embrace us.’ (1)

“The message of Laudato Si’ could not be clearer. Pope Francis not only firmly acknowledges the reality of climate change but insists on its close connection with human activity: ‘A very solid scientific consensus indicates that we are presently witnessing a disturbing warming of the climatic system … Humanity is called to recognize the need for changes of lifestyle, production and consumption, in order to combat this warming or at least the human causes which produce or aggravate it.’  (23)

“The encyclical highlights in particular the need to respect and protect the dignity and lives of the poor. They are the most vulnerable to climate change. It emphasizes that ‘a true ecological approach always becomes a social approach; it must integrate questions of justice in debates on the environment, so as to hear both the cry of the earth and the cry of the poor.’ (49)

“The people of Malawi do not need scientific investigations to show them that climate change in their beautiful country is very real. They have been undergoing its effects in dramatic ways in recent years: increased water scarcity, unpredictable weather patterns, recurring flooding and droughts, unpredictable start of rainfall with short rainy seasons, prolonged dry spells during rainy seasons, drying up of rivers and lakes with lowering fish supplies, heat waves, frequent bush fires, increased prevalence of water borne diseases, low and unstable hydro-electric production, declining flora and fauna, and declining natural species…

… “Early on in Laudato Si’, the Pope notes that ‘change is impossible without motivation and a process of education….’ (15). Loyola Jesuit Secondary School (LJSS) in Kasungu, Malawi, embodies this message not only in its instruction, but in its construction. Soil-based bricks have been used in its new buildings rather than the traditional kiln-burnt bricks. The school’s desks and chairs and bunk beds have been made using trees from a lot where new trees are planted regularly to prevent deforestation. Solar water heaters have been installed. Small steps, but good steps.

“Malawians alone can’t alter the climate change catastrophe the country faces. Very little of the global emissions of greenhouse gases come from a poor and non-industrialized country like Malawi. The people of the mighty fossil fueled economies of Europe, North America and China must be honest in looking at the situation, creative in designing effective responses and courageous in taking some hard and unpopular actions. Pope Francis repeatedly calls upon more effective international cooperation for the protection of our common home.”…