Letter to the Trump Administration for South Sudan TPS Redesignation 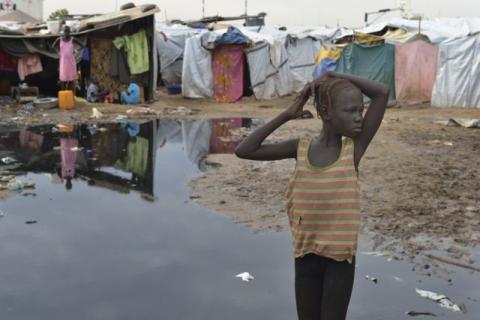 In August 2020, the Maryknoll Office for Global Concerns joined other organizations in urging the Trump administration to extend and redesignate Temporary Protected Status (TPS) for South Sudan. UPDATE: On September 3, 2020, the Trump administration decided not to redesignate South Sudan for Temporary Protected Status. Read a statement by the Catholic Legal Immigration Network (CLINIC) on this decision here.

We, the over 210 local, regional, national, and international organizations, call on you to extend for 18 months and redesignate Temporary Protected Status, or TPS, for South Sudan to protect the 84 current South Sudanese TPS holders and their families, as well as recent arrivals who 1 would benefit from redesignation. Our request is rooted in current country conditions and U.S. national security interests, especially in light of COVID-19.

An 18-month extension and redesignation of TPS for South Sudan is warranted as the conditions that existed for the 2018 extension of TPS for South Sudan remain, and, in some cases, have worsened. Civilian casualties, human rights abuses, war crimes and crimes against humanity continue in South Sudan. 4.8 million people are currently in need of protection. Since civil war 2 broke out in 2013, at least 400,000 lives have been lost. In the most recent comprehensive data available from the UN mission in South Sudan, nearly 700 civilian deaths, more than 450 injuries, and 600 abductions were reported in the first quarter of 2020 alone.

The use of child soldiers is also ongoing in the conflict, with UNICEF identifying at least 19,000 as of 2019. Clashes among ethnic groups persist, and in late May 2020, hundreds of civilians were killed when a militarized group entered a village with machine guns. Three aid workers 6 from Doctors Without Borders and the U.N. were killed in the attack. In fact, conditions in 7 South Sudan are so extreme that humanitarian organizations including Catholic Relief Services, International Committee of the Red Cross, Médecins Sans Frontières, Oxfam International have stopped relief services in Jonglei, South Sudan. Civilian deaths at the hands of government forces were recorded in the capital city, Juba, in June 2020. In July 2020, USAID reported 8 ongoing conflict and displacement across the entire country. The report documented at least 946,000 newly displaced people across several regions. Rape and sexual violence used as a weapon of war continues in South Sudan. In 2019, there were 224 documented cases of conflict-related sexual violence affecting 133 women, 66 girls, 19 men and 6 boys. 65 cases were 11recorded in the first quarter of 2020 alone. Cases of sexual violence continue to be  underreported.

In addition to armed conflict in South Sudan, an 18 month extension and redesignation of TPS is needed to protect recent entrants from the deepening humanitarian crisis. At least 7.5 million people are in need of humanitarian assistance in South Sudan, up from 7.1 million in 2019. At 14 15 least 1.6 million are internally displaced from conflict and other factors. South Sudan is hosting 16 approximately 300,000 refugees from neighboring countries as well as 600,000 spontaneous returnees. 2.3 million South Sudanese people have been driven over the border, an increase 17 from the previous year, and live as refugees in surrounding countries.

The Famine Early Warning System Network (FEWS) predicts food insecurity will worsen over 2020 due to conflict from complete depletion of cereal stocks from the previous harvest (which were affected by climate extremes among other factors) and desert locust damage to crops, to COVID-19. FEWS predicts more than 6.5 million people will need emergency food assistance  by September 2020. More than 50 percent of the population is facing crisis level food shortages and if movement becomes more restricted in the country due to COVID 19, widespread famine is possible. The number of children in South Sudan facing acute 21 malnutrition rose from 13 in 2018 to 16 percent in 2019. More than 1.3 million children under 22 the age of five are projected to be acutely malnourished in 2020. Eighty percent of South Sudanese are living below the absolute poverty line, greatly contributing to the food and other humanitarian crises. Ongoing extreme cycles of drought and flooding are a major issue,  destroying food sources and affecting delivery of aid.

Access to clean water and sanitation remains limited in South Sudan, with more than 5.5 million people in need of assistance. Only 60 percent of nondisplaced people and 45 percent of 26 displaced people have access to clean water and sanitation. Nearly three quarters of households report family members suffering from waterborne or vector-borne illnesses.

South Sudan has little health care infrastructure due to ongoing conflict and economic collapse, making both extension and redesignation even more dire given the COVID-19 pandemic. At least 3.6 million people are currently in need of health care services. Due to ongoing conflict and economic collapse, less than half of South Sudan’s healthcare facilities are fully functioning. The country only has 24 ICU beds and 4 ventilators for a population of 11.7 million people.There is only one laboratory dedicated to coronavirus testing and only one permanent infectious disease unit in the entire country. As of late June, there were 2,000 known cases of COVID-19 and 35 deaths. While monitoring along South Sudan’s shared border with the Democratic Republic of Congo has so far prevented the spread of that country’s Ebola outbreak, risks remain. A new Ebola outbreak was announced in DRC in June 2020. Outbreaks of other infectious diseases continue across the country including hepatitis E, yellow fever, malaria, acute respiratory infection and acute watery diarrhea.

II. Extension and redesignation of TPS for South Sudan is in line with humanitarian values and U.S. national interest:

By protecting people’s lives and granting work authorization, TPS serves key national and regional security interests, advances moral and strategic U.S. engagement with the international community and provides other benefits to the United States. The United States has made commitments to help restore stability in South Sudan and to assist those that have been impacted by the protracted violence. TPS is a major piece of that commitment.

In general, TPS holders make great contributions to the U.S. economy, working in key industries such as construction and home health care and paying into the U.S. GDP, Social Security and Medicare. Many TPS holders are essential workers, serving on the frontlines of the COVID-19 39 crisis. TPS holders also send vital remittances to family and friends in countries of origin,  providing unofficial foreign aid that allows people to meet their basic needs and helps stabilize
countries and regions. In South Sudan, remittances make up 34 percent of the country’s GDP. Remittances to African nations are expected to plummet by 25 percent this year, due to COVID-19. Extension and redesignation of TPS for South Sudan would help keep life-saving financial support flowing into the country.

In line with the above policy principles and using the law as Congress intended, we urge you to grant the maximum protection possible through an 18-month extension and redesignation of TPS for South Sudan.