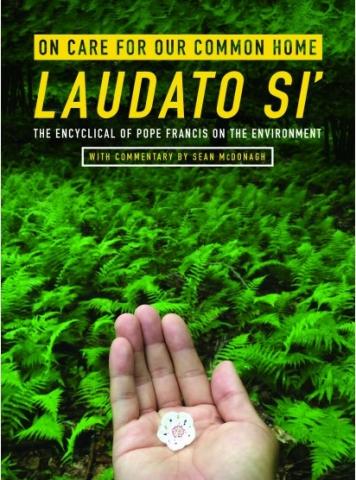 On February 28, 2016, the Maryknoll Office for Global Concerns brought Columban Father Sean McDonagh to the Maryknoll Mission Center in New York, to speak at an event celebrating the release of Fr. McDonagh’s Orbis book, “On Care for Our Common Home, Laudato Si': The Encyclical of Pope Francis on the Environment.” The following article was published in the March-April 2016 issue of NewsNotes.

Father Sean McDonagh, Irish Columban priest and eco-theologian, began his environmental activism as a missionary in the Philippines in the 1970s, where he witnessed the devastating deforestation of indigenous lands in Mindanao. At an event at Maryknoll celebrating his new book published by ORBIS, Fr. McDonagh spoke of both the continuity of Laudato Si’ with the social doctrine of the Church and the surprising newness of Pope Francis’ vision.

In the encyclical, Francis quotes from Pope Benedict and St. John Paul II and other predecessors, clearly demonstrating that concern for the earth and environmental degradation has been part of the social teaching of the Church for decades.  Fr. McDonagh spoke about two additional aspects of Laudato Si’ that represent significant new teaching by Pope Francis: First, climate change and destruction of nature is not only an urgent concern but a moral imperative. Francis says that indeed, it is a sin that “the earth, our home, is beginning to look more and more like an immense pile of filth.” (Laudato Si’ 21)

Fr. McDonagh said another significant new teaching in Laudato Si’ is the Earth and its creatures have “intrinsic value in themselves independent of their usefulness” (140). The view of humankind’s dominion over creation for our use (and abuse) is a mistaken reading of sacred scripture. In his book, Fr. McDonagh writes:

“In many ways Laudato Si’ is an attempt to redefine the relationship between humans and the rest of creation, so that we can soon reach a point where the basic needs of all humans will be met in a way that does not endanger the rest of creation or irreversibly damage it . . . He presents the earth as a sister ‘who now cries out to us because of the harm we have inflicted on her by our irresponsible use and abuse of the goods with which God has endowed her.  We have come to see ourselves as her lords and masters, entitled to plunder her at will.’(Laudato Si’ 2)”

Fr. McDonagh sees this encyclical as the first attempt to capture the full extent of the modern ecological crisis and the urgency to reverse course: “Doomsday predictions can no longer be met with irony or disdain.  We may well be leaving to coming generations debris, desolation and filth.”(Laudato Si’ 161) “These are certainly very strong words from a pope,” Fr. McDonagh wrote. “Hopefully, they will arouse Catholics, people of other faiths, and people of none to begin the daunting task of protecting our planet and caring for the poor.”

“I began these reflections by stating that Laudato Si’ was one of the most important documents to come from Rome since the beginning of modern Catholic social teaching at the end of the nineteenth century,” Fr. McDonagh writes in his book. “Pope Francis’ mission in writing the encyclical was to ensure that every human being can live in dignity and peace, with his or her basic needs met while, at the same time, protecting planet Earth. If Pope Francis’ encyclical encourages and helps sustain this process, the outcome will be a great victory for humans, for other creatures, and for the planet itself. If, however, the invitation to be part of this new world fails and humans continue with the exploitative behavior that they have shown in recent years, it will be tragic for humans, for other creatures, and for the planet. The stakes are very high. In fact, they could not be higher!”

Faith in action: “On Care for Our Common Home, Laudato Si’: The Encyclical of Pope Francis on the Environment with Commentary by Sean McDonagh” is available for sale at www.orbisbooks.com