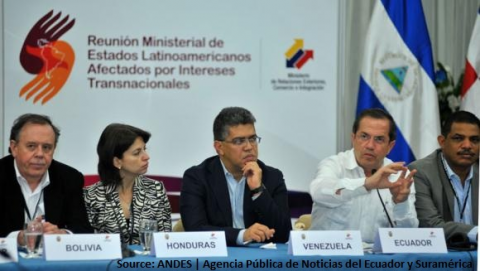 In response to the dramatically increasing number of lawsuits and claims in international tribunals by European and U.S. multinational companies, ministers and ambassadors from 12 Latin American countries met in Ecuador on April 22 at the "First Ministerial Conference of Latin American States affected by the interests of transnationals" in order to create mechanisms to better defend themselves.

In the final declaration, the countries pledge to support the creation of a regional alternative for settling investor disputes; to develop an International Observatory to investigate the functioning of international arbitration courts; and to create an executive committee to coordinate joint legal actions with international legal teams and design a communications strategy to counter corporate media campaigns by telling the governments’ side of these cases. Ministers from seven attending countries (Ecuador, Bolivia, Cuba, Nicaragua, Dominican Republic, St. Vincent & the Grenadines and Venezuela) signed the final document, while five others (Argentina, Guatemala, El Salvador, Honduras and Mexico, represented only by ambassadors without the mandate to sign) are considering joining the pact. They will also work to bring in other countries to the agreement, specifically mentioning India and South Africa.

The ministers noted that, "The most negative consequences of [our] commitments [to international investment agreements] become evident now, precisely when a number of nations of the South are exploring new ways for development. It is not a coincidence that the need to overcome the obsolete normative trade schemes between the States of the South and the North becomes more urgent now, at a time when most Latin American institutions have reoriented their priorities towards attending the needs of their own peoples, instead of the impositions of the foreign capital."

In a parallel meeting, dozens of social movements from the 12 countries and beyond met producing their own document in support of the initiative. Parts of that letter follow:

"As social movements and civil society organisations, we consider International Investment Agreements (IIAs) – such as the Bilateral Investment Treaties (BITs) and investment chapters in the Free Trade Agreements (FTAs) and other similar, so called, Association Agreements – to be part of an architecture of impunity [for] transnational corporations (TNCs). As such they undermine peoples’ and nature’s rights, as well as the sovereignty and constitutions of nations, democracy and the public interest. These agreements further consolidate the asymmetry of laws that propagate that the rights and power of corporations are protected by ‘hard law’ and are above the rights of peoples and communities. We believe that Nation-states should have not only the obligation but also the full freedom to implement laws and policies in favour of the people and the environment, without the threat of being sued by transnational capital…

"… [W]e propose advancing an alternative legal framework for international economic relations that is based on democratic principles of solidarity and justice, and prioritises the rights of humans and nature over private interests and profits. This framework should include binding obligations for private and public transnational corporations on issues of human rights, as well as economic, labour, social rights, and respect for Mother Nature. It should also guarantee governments’ possibility to enact public policy for the realisation of these rights. In this context, any investment agreement should also include a mechanism for public participation and democratic discussion with representatives of the relevant social sectors. Therefore, we, the undersigned organisations:

"1) Express our solidarity with the people who suffer daily the impacts and consequences of the actions of corporations, either private or public…

"2) Reject the demands of investors and transnational corporations in international tribunals, and particularly the multimillionaire arbitration awards against States; these tribunals that overwhelmingly represent the interests of transnational capital over the interests of people in sued countries. We reiterate our solidarity with the people and countries affected, along with our demand that States annul, denounce and stop signing the various agreements and treaties that unlawfully subjected them to foreign jurisdictions and violate rights.

"3) In the same spirit, we welcome the organisation of the First Ministerial Conference of Latin American States affected by transnational interests... We remain hopeful that this initiative flourishes, especially because of the urgent need to put an end to transnational investments from private or public capital that do not contribute to the well being of people and of nature.

"4) Taking note of the various proposals included in the final declaration of the Conference, we support the creation of an International Observatory on investment disputes, the establishment of the Permanent Conference of Latin American States affected by the interests of transnational corporations; and the search for global agreements between countries of the South that reinforce the defenses of our people and countries against the actions of transnational corporations. We are committed to contribute timely to these processes with our experience, observations and recommendations…

"5) Taking note that the Declaration refers to the need to create mechanisms for ongoing dialogue with social movements and organisations. We believe that such mechanisms could be a step conducive to the creation and consolidation of a process of direct participation of the people and movements. We offer the knowledge and experience of our organizations and movements, accumulated over decades of work, to contribute to the task at hand…"