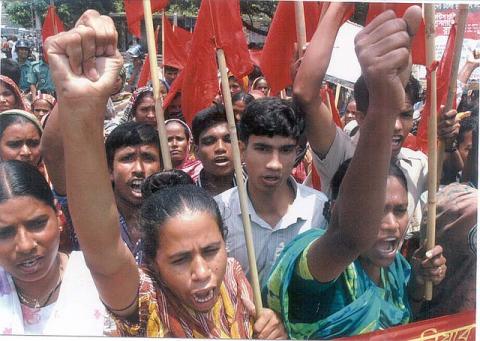 The following article appeared in the May-June 2013 issue of NewsNotes. Photo of 2005 Bangladeshi workers' protest by Derek Blackadder.

In most of the world, May 1 is the day to celebrate workers. This year’s commemoration included memorials for the at least 1,127* people who were killed in the terrible collapse on April 24 of a factory in Bangladesh, a disaster that could have been avoided had the building’s owners not shirked their responsibility to provide a safe environment for workers. This responsibility requires a financial expense and due diligence, two things often avoided in order to promote better profits and earnings for shareholders.

Despite huge accelerations in profits for some large business owners, most workers continue to struggle to earn enough to provide for their families. According to an AFL-CIO report, CEOs of major corporations in the U.S. earn 354 times the pay of average U.S. workers. The gap has increased dramatically: 30 years ago, wages of CEOs in the U.S. averaged 42 times more than U.S. workers, and 20 years ago, they averaged 201 times the pay of workers. Ten years ago, the gap was 281 times.

In addition to the wage gap, a recent study by the United Nations finds that gaps exist "in implementing new safeguards among businesses based in the United States, both in terms of their domestic and international operations, to ensure the protection of human rights of workers and communities affected by those operations," according to an article published on May 4 by InterPress Service (IPS) (UN finds "little appreciation" for human rights among U.S. businesses, by Carey L. Biron.)

Recently, the UN Working Group on Business and Human Rights spent 10 days observing companies in the U.S.; its final report will be presented to the UN Human Rights Council in June 2014.

"‘With a few exceptions, most companies still struggle to understand the implications of the corporate responsibility to respect human rights,’ Puvan Selvanathan, the current head of the Working Group and one of the two members on the U.S. trip, said at the end of the mission. ‘Those that do have policies in place, in turn, face the challenge of turning such policies into effective practices.’"

According to the IPS article, "Selvanathan and his colleague, Michael Addo, focused on gauging U.S. adherence to and regulatory changes following the 2011 adoption of the UN Guiding Principles on Business and Human Rights. These principles offer the first international standards aimed at ameliorating the negative rights impacts of global business.

"Although the United States is a signatory to the Guiding Principles, Washington has not yet come up with a national plan for their implantation, a gap highlighted by the Working Group and long emphasized by civil society. …

"In late April, … a group of civil society groups sent a brief to the U.S. State Department outlining a series of recommendations to bring the country closer in line with the Guiding Principles and to strengthen related indicators.

"The brief’s three central recommendations, in addition to developing a national implementation plan, include strengthening remedies for human rights violations. It also calls on regulators to mandate that U.S. corporations incorporate human rights into their ‘due diligence,’ the legally mandated inquiries that companies must take ahead of a business sale or agreement. Currently, such a step regarding human rights impact is not required. …

"Selvanathan and Addo pointed to ‘significant gaps’ in oversight, regulation and enforcement in the context of U.S. attempts to conform to the Guiding Principles. Yet they said the responsibility goes beyond government officials.

"‘There is negligible awareness of the Guiding Principles generally among U.S. stakeholders,’ they note in an eight-page concluding statement …, ‘and, it seems, little appreciation of human rights being material to the conduct of business in the U.S.’

"Speaking with reporters and civil society on [May 1], the Working Group voiced particular concerns regarding low-wage agricultural workers, lack of free and prior informed consent for Native American communities engaging with big business, and harmful practices by the domestic extractives industry.

"Indeed, Selvanathan and Addo reserved some of their strongest language for these issues. For instance, they reported having heard "allegations of labor practices in low-wage industries with migrant workers, particularly within the services sector, that would be illegal under both U.S. laws and international standards.’ ..."

*Death toll updated from printed version. The search for survivors ended on May 13.

Read the entire article about the UN observation team here. Consider signing this petition at Avaaz.org in response to the tragedy in Bangladesh; the petition asks the CEOs of fashion brands to commit to pay for routine, independent inspections and safety upgrades for supplier factories.