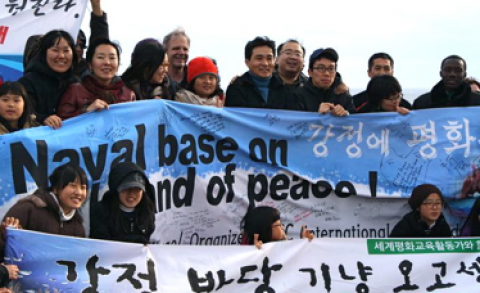 The following was published by the Union of Catholic Asian News (UCAN). Read about Jeju Island and its residents' efforts to stop the construction of a naval base in the September-October 2011 and November-December 2011 issues of NewsNotes.

The People's Solidarity for Participatory Democracy (PSPD) [on April 18] filed a petition to the UN Human Rights Commission to review alleged abuses against protesters of a proposed naval base on Jeju Island.

The petition was filed on behalf of four protesters, including Father Bartholomew Mun Jung-hyun, who was recently injured during an attempt to block construction at the site in Gangjeong village.

Some 450 activists and residents of the village have been arrested or detained by police for protesting the naval base since 2010, according to the PSPD petition.

"The petition to the UNHRC is one of the ways to inform people worldwide about rights violations in Jeju," said Baek Ga-yoon, coordinator at PSPD.

Kang Dong-kyun, head of Gangjeong village and one of the petitioners, said he and fellow activists would continue to publicize the Jeju abuses in the international community.

The petition urges the UNHRC to investigate claims of abuse and urges special rapporteurs to prevent future violations of individuals' rights.

The naval base project was announced in 2007, at which time the government selected Gangjeong village on Jeju Island as the site for the new 400,000 square meter facility.

The base will be home to a new fleet of destroyers set to patrol the East China Sea between China and Japan.